Tamara Moss visited our STEM land in February. She is running Sunflower Learning C enter in Rajashtan. When she visited STEM land she was inspired by children’s projects in scratch. She wanted their children from SLC also want to learn scratch programming. There were 3 teachers and one student  from Rajashtan. STEM land facilitators, two of us (Saranya and Muralidharan).

We started with the tasks. First, we want them to understand about scratch, so we asked them to drag the code and click on now you say what is happening?. It was like conversation then they got whatever the command that they are dragging the sprite is doing it. Finally, they found that. Then we gave the first task to tell a story.

Here is the outcome which we got from them.

The task 2 was interacting with computer by asking questions (general knowledge question). We explained what we are going to do, but we didn’t do it. We asked them  to try. When they struggled we helped them. 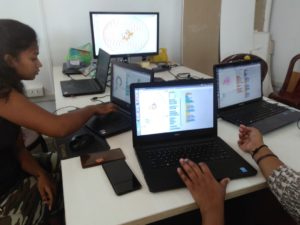 Here is the outcome which we received from them.

It was continuing the last session. When they completed all the shapes we asked them to use the control function to repeat the shapes. They did that task also they got different Mandala’s. It was very nice. 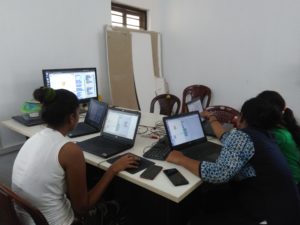 We gave Maze game task to them. Before  doing, we explained about backdrops and filling colour in the backdrops also we  a gave small demo to make a Maze game. They were very excited to make maze game. Finally, they did the maze game also they have used scores. They learnt to use data blocks in the scratch.

We continued with Maze game to add life in their game. This was the last task for them. They did the life by using data blocks. Then we told them how to use write expression, arc sprite and why it is being used. We asked them use hep function to get more clarity on what they have learned. It is like tutorials. Also we had 15 min questions for clarity.

Here is their feedback for the scratch course.