On Saturday class with the 4th graders I had taken a session on Origami. We made an origami bird.

To make the bird we needed 15cm x 15cm A4 paper. For that we asked the children to draw a 15cm x 15cm square on their A4 sheet. With the paper cutter we were able to cut the paper as per the requirement.

Then I started demonstrating on how to make the paper bird by giving them instruction for each and every steps.

What I was able to do well:

My observation of the class:

The children happy and were playing with the birds. 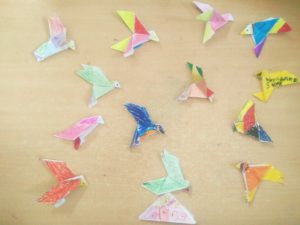