The 7th graders (2018-2019 batch) had stepped in for their Mathematics class for the first time in STEMland this year.  They took their own time and became familiar with filling their weekly plan and updates on the laptops. They saw their seniors work on projects and were eager to learn, some of them took the courage to approach and did learn a few blocks in scratch and got the feel of it, but had a little hard time on expanding their code. They often started to play around with the back ground painting and changing colors of sprites, but the coding part was still a little confusing.

The previous batches had a guidance course into scratch and that had kicked started their projects.  I had thought to do something of this type and get the current batch flexible with programming too. Then as a team we decided to create diversity in the class and put up an announcement for all those who were interested in attending the course to sign up. 5th graders from Isaimambalam had shown interest and 8th graders from Udavi along with the interns in STEMLand the course began. 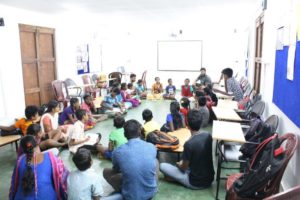 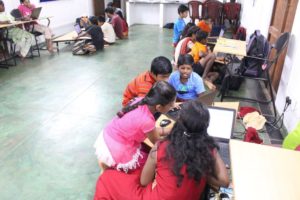 All the participants were eager to code and make the computer do what they want rather the vice versa. Pairs were made on a mix up of boys and girls, young ones and elders, interns and students. Each day started with a focused goal and how to broaden it when attained and make the program more flexible. Girls were eager in writing their scripts and explaining their program at the end of day or beginning of the next session on the main screen. Some children did not want to move on to the next task unless they had completed the current one to their satisfaction, and took extra time and involved in making their program more stable.

Through the course the children had learnt to use the pen function and through this draw regular shapes. Once they knew the basics they made the same program dynamic and used ‘for loops’ to show all the shapes starting from an equilateral triangle to square, pentagon, hexagon, heptagon, octagon, nonagon, and decagon.

The children had learnt importing and exporting of sprites (arc function to draw arcs in practical geometry, writing sprites to print on the screen)

The children were given feedback forms, and the reflections were showing that they all are more confident now than before in doing projects with scratch. They also mentioned as teams they were able to learn and help each other more.

Towards the end all children had made a number of projects to show what they had learned through the course. This was a stepping stone for them to continue and make projects based on their curriculum to project their mastery over a concept.

At present the children have come up with new projects, e.g. Abinash, Shakthikannan have created projects in measurements. While Murali took it to the next level and is doing a project from out of his syllabus (a+b+c)^2. This has inspired others and Guna sundari, Yuvan, Jeeva, Jannani, Anisha have started to expand from (a+b)^2