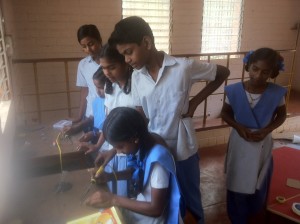 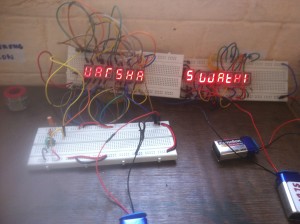 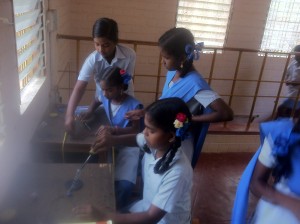 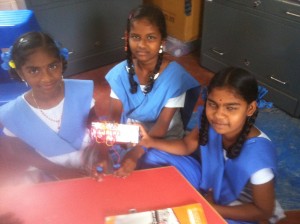 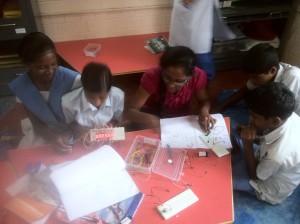 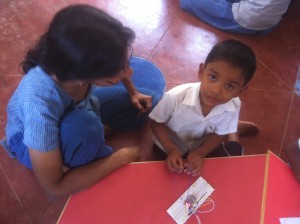 The 5th and 6th graders had made a metre square using chart papers to measure its area. They measured and cut a wooden rod and used it as a scale of 1 metre. Everyone were involved and I felt they were responsible for the work they were doing. A girl(Keerthana of 6th grade) used a hack saw for the first time to cut the wooden rod. Children used Dienes blocks to calculate areas of their notebook. Then they tried guessing the area of the 1 meter chart paper by placing their note books on the chart. They came up different numbers.

The next class we had 3rd, 4th, 5th and 6th grade combined class for demonstrating area of a square/rectangle. The 3rd and 4th grade did the activity the older children did the previous class. ie, calculating areas of their notebook using Dienes blocks.

The 5th and sixth grade children measured the area of the chart paper that Arham had put together for the children to measure. The chart paper was 1.6m by 1.4m. They had difficulty in multiplying decimals. They kept on placing the decimal point in the incorrect position. We demonstrated decimal multiplication using graph sheets. They they were able to understand decimal multiplication.

The class started with showing the Piper movie.
What they learnt from the movie:

Then we asked what would they like to do in Scratch?
Finally Sanjeev showed one example to the students how to separate the body parts of a cat. He introduced vector mode to split the parts of the body. Once the mouse pointer is on the parts of the body it displays the part name. We told them to practice what we taught them. Some student were not able to do on their own and we helped them. And they were able to do it.

At the end of the class we asked what was difficult:

Without using victor mode students were having difficulty in separating the parts of the object.

Rigorous:
I would like to be rigorous in time management.
Home work:
To create a new project on their own with what they learnt in the class.
Prathap 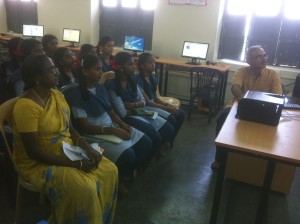 Recently the STEMLAND name board made using SSD had got dim and the 7th std students took it as a project to fix it. They de-soldered the dim SSD’s and Replaced it with new ones.

Barani got interested in the SSD’s and started powering them up using the Arduino, he manged to code the Arduino to print all the numbers 0-9 using two SSD’s

Then to take a step further he started his quest to build a clock. He had added a counter to light the corresponding diodes  in the SSD along with Sanjeev, this was done using a 9V battery.

As I already mentioned in my blog that Deepanam children built an oscillator. Bharani used the output of the oscillator as an input and made the clock count from 0 to 9.

Bharani making the clock count by removing and inserting the input each time.

Giving input from the oscillator built by Pravina (Deepanam kid).

To check if your hard drive has more un formatted disk space that is not being utilized do the following:

You will be able to see all the partitions; allocated and un allocated.

If there is un allocated space, format the partition and add label to it and make it active.

The new drive will show up in My computer 😉

The 6th std from Udavi,  Had couple of motors in their equipment stock. They were eager on biasing them. It started with removing the gear from the motor and setting a flan blade to it. The children noticed that wind was only produced in one direction when connected to terminals of a battery, it was either inward or outward. So by changing the polarity the direction of rotation also changed in the motor. Then came the idea of creating a bubble gadget( the 5th std students were playing with bubbles during the break, this gave the idea I presume) At first the students used two of the same kind of motors(same RPM) one for blowing air and the other for creating bubbles on a stick attached to a ring made by shaping copper wires into a circle and using glue gun to stick them on. This some how did not work as the both the motors were synchronized together. Then we got a 100RPM motor and used it as a substitute, this made possible of creating the bubbles 🙂 Then they cut wood to make a platform to fit the set up and nailed into a plywood and the setup looks like:

A week ago few students ( Kabilan, Vignesh and Punithavel ) came to me with a question and the question was “Akka (sister), what is PIE CHART and how do we do it?. Out of three of them, two doesn’t have a clear idea of what is Fraction. So, we started with Montessori fraction kit. I took the 6th family of the kit ( circle of 6 pieces). I started with a question “6th family has 6 pieces.  Then what is the percentage of it ?”.

“100% akka” the answer came out in a fraction of seconds from all of them with confident voices. Then I took out two pieces from that and asked the same question. That time there were two voices started murmuring something which I couldn’t hear clearly ( I think, that’s what they wanted). I waited for few seconds to Punithavel to complete his mental calculation. He said, “It must be more than 50% and less than 75%” and immediately after he shared his answer he started explaining his thought process to his two friends. He told, ” if 3 pieces give 50%, then 4 pieces could be more than 50% but less than 75%.  They shook their heads as the sign that they understood it but they seemed to confused too. I felt good about his thought process though he couldn’t tell the accurate answer.

Then I asked them to tell a story for that. This time Kabilan started. “Akka I had 6 cake pieces and I gave two to Vignesh and 4 pieces left. I continued with his story asking,” So out of six, you have only 4?”. They said, “Yes”. I asked,” Can you write that in your notebook?”. Punithtavel asked, ” What akka?”. I replied,” What you just said which should be written as a fraction not as a sentence”.

Two wrote it as 4/6 and one wrote it as 6/4. Each showed it to me to check their “ANSWERS“. I replied saying ” I don’t know. You discuss this among yourself and tell me”. After the discussion, they all came up with 4/6. I said, ” it seems fine but how can I convert this fraction into a percentage?”. Punithavel told, “It’s easy akka. All we need to do is multiply 100 with this fraction” and the rest of two nodded their head as they agreed with punithavel’s idea.

I thought that they were ready to do their pie charts so I asked them to tell me the difference between the percentage which we calculate there with the percentage which given in the text book’s example problem on Pie chart. They found that in the textbook they were multiplying 360 instead of 100 with the fraction part. I told them to go figure it out on your own. Off course it took time because they have to ask their buddies. But they did. Here is what came out after the conversation.

The children of Deepanam were interested in buzzers. Then we decided to build a game using buzzers. Sanjeev came up with his innovative idea of building a maize game.

Description of the game:  Small wire maize will be set up and it will be tied between two poles. There will be a small loop of wire at one end. You have to take the loop to the other end of the maize without touching. If you touch the maize then the buzzer will beep.

Since they were new to electronics they built the game step by step. We broke it down into mini tasks before building the full game.

I built model for them. Meera was not interested in small tasks instead she built the whole game by just seeing the model that I built.

It was the second class in STEMland at Isaiambalam with the 4th graders. I asked the children to display what they learnt in STEMland. Some children wanted to play strategic games with the visitors. Some of them wanted to light up LEDs.

Then I taught them few concepts that they should have known before building real circuits. I showed them how to light up two LEDs in series. Then children built circuits on their own.

I gave them a simple task to light up 4 LEDs using a 9V battery. Gurumoorthy figured out a way to light 4 of them. He put two LEDs in parallel and connected them in series. For a 4th grader to figure out these was something special.