Lets loot at a sample program for better understanding of threads. It was written in python extension C( calling C function from python). This is an example for parallel processing. So I made a program to print string ( some words or sentence) after every 4 seconds. But the goal is to modify the default time of printing( delay_time) & string to be printed ( command) without stopping the process (while the program is running). There arise a concept of thread. I used two mechanisms in the code.

The Python interpreter is not fully thread-safe. In order to support multi-threaded Python programs, there’s a global lock, called the global interpreter lock or GIL. Therefore, the rule exists that only the thread that has acquired the GIL may operate on Python objects or call Python/C API functions.

This is so common that a pair of macros exists to simplify it:

… Do some blocking I/O operation …

Probably the most commonly used synchronization option to accessing the shared data. Simply, it used to synchronize threads so that only one thread can make modifications to shared data at any given time.

This process is done by two operations,

Only one thread can successfully acquire the lock at any given time . If another thread tries to acquire the lock when its already in use, it gets blocked until the lock is released. So it avoids race condition.

In the function ThreadTest_set_st(), I declared a character pointer instead of character array is to avoid the the clash between the c and the python while while allocating the  memory  for the local variable (command_local). So i created the pointer for that local variable in which python allocates the memory space.

I also created ThreadTest_set_dt function to prove,  simply getting the user input directly to the variable ‘delay_time‘ could not work at all.  So one need to be more careful when creating this sort of functions.

First, i need to run main function as thread. Then, i can pass the string to the main function using following procedures in python terminal.

import Threadtest    //  this used to import the module 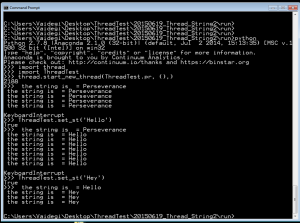 The Deek robot is similar to the Arduino pro mini with a ATmega 328. it has no USB interface. i used the Arduino UNO to program the Deek robot, without removing the micro controller ATmega 328 from the UNO board.

1. Connect the Arduino UNO and upload the program

Now using Arduino UNO as an ISP, from the Tools, Programmer .

and selecting the board as Arduino Pro or Pro mini (5V,16Mhz)w ATmega 328, from the Tools, Board.

Now  use AVR ISP, from the Tools, Programmer .

and selecting the board as Arduino Pro or Pro mini (5V,16Mhz)w ATmega 328, from the Tools, Board.