After a long time I got a opportunity to work with Physics materials… This week I planned to take Light lesson to 7th graders of Isai Ambalam. I’ve started with mind map for Light and then moved on to mirrors. Later I asked the students to look at their text books’ pictures ( Light lesson) without reading anything and then we started a discussion on ‘ What did I get on seeing the pictures?’.  It was a nice discussion where all the students started to say something related to the light and mirrors. They even talked about virtual oasis condition and stated it as a virtual image (thus they almost covered the Light lesson’s concepts which given in their text book). 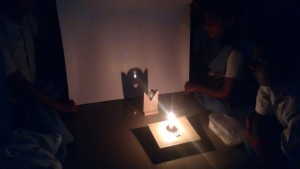 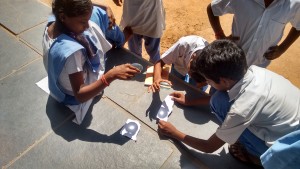 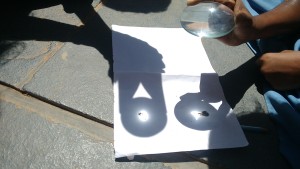 I brought some lenses and mirrors ( both concave and convex )from STEMLAND . It made them to observe the differences between Concave and Convex  lenses (or mirrors). We did few experiments with light. These brought me to my childhood days.. Next day, a student ( Praba karan) brought a broken torch light and told that ‘ This must have made by Concave lens as it is spreading out the light everywhere’. Totally, my class on Light went well with these kids… I also felt something different this time.

The 6th grade students had a lot of fun interrelating fractions and angles. They took various fraction pieces and estimated and checked themselves the corresponding angles using the fraction kits. Once done, they figured out a game that they played by calling names of fraction and the others estimation their corresponding angles. 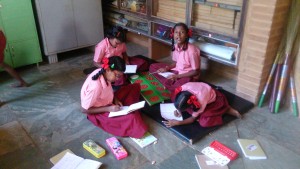 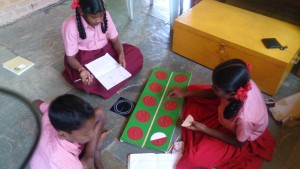 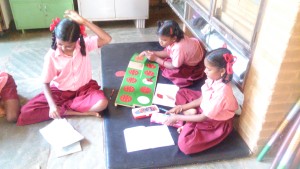 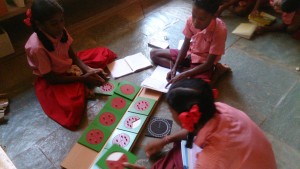 Sanjeev has started an electronic class for the children who come for their activity classes on Saturdays. Children got so excited learning on how to properly use the multimeter. They learned how to calculate the Resistance, Voltage, and check the connectivity of the circuit.

In fact students learned that the multimeter can actually go bad if you don’t use them properly.

A small theory section was added to make the class more informative. Students got that Voltage and power are not the same.

Then they measured voltages of few old batteries and resistance of some resisters. A 9th student even showed how to find the continuity of a circuit using a multimeter.

Last year 2015/16 we asked the children to fill out their daily plan on an excel sheet. The above link downloads the excel. This year 2016/17 the children are making weekly plans and not daily plans!

I was always confused with log. Sometimes its difficult for me  to handle log based problems . So, I decided to do project in log in scratch to visualize the curve and also to get a clear picture of that.  I started with comparing all the basic curves. First I created Y = X and Y = X^2 as follows,

Then, I went for log(x) and log (x^2). There is no much difference in these two. The plots are same in shape.

At last I plotted the exponent curve (e^x) as follows,

The children were given a scenario where they had to equally cut pencils and place it in their geometry boxes. They did not physically cut pencils but used papers instead.

The question given was : Cut 5 pencils and place them in 4 geometry boxes equally. Initially they had some difficulty in placing the pieces equally in the boxes. But once they figured out a pattern in their mind, they began to make different questions themselves and  solved it.

Once they got a good handle of the procedure, they didn’t need the pencil(paper) and the geometry boxes anymore.

They also drew pictures of pencils and geometry boxes in Scratch and demonstrated how they split the pencils equally into the boxes.

You can change multiple file extensions using command line. I had 20 odd xlsx files which I want to change as csv files.

Change to directory you want to change the file extensions. 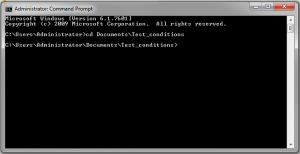 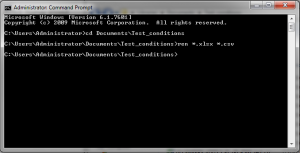 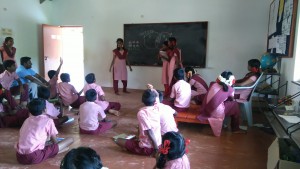 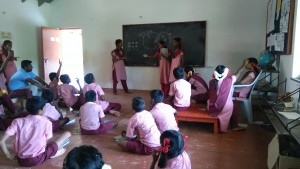 Sanjeev came up with the idea of letting the 9th grade children present what they learned so far over a month to the rest of the class. As in some days we have combined classes with the 7th and 8th graders, they also get exposure to the presentations.

Everyday, different chapters are presented to everyone. We started with the chapter ‘Sets Theory’. The ‘Sets Theory’ group started the presentation with a game. I thought it went quite well and the younger children were also into it. The other days there were no games presented and I thought only the 9th graders got what was presented.

In the coming weeks the children have been told to do 4 things differently than what they did before. Lets see what happens. 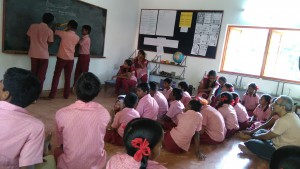 Barani had started this project to get a feel of scratch. This was one project which was not about animated characters playing a role in a story. Next he tool up an even interesting subject from his learning this term, i.e Practical geometry. He wanted to show how angle bisectors were drawn for a given angle.