An enthusiast researcher Mr. Thiyaragaraja Kumar visited STEM land on 20th June 2022 to exhibit the projects made by him and to inspire young minds.  He is an inspiring, energetic, curious person who makes projects, and teaches and guides children to invent projects. He plans to take project-based learning for the children.

The projects include a wireless charging unit, a quiz breaker, and sun-directed solar panel motor drive equipment. The wireless charging unit works based on the principle of mutual induction. The Quiz breaker model is based on relays. It finds its Industrial usage mainly in industry automation and helps in finding the valve tripping or if there is any fault. Using this model, faults in the high boiler plants can be easily found and repaired accordingly.

The sun-directed solar panel motor drive model was interesting and inspiring. It works based on the principle of movement of the sun.  this exhibit was presented at the Japan conference in 2015. According to the movement of the sun the solar cell panel moves which is driven by the motor using an LDR. This model gained more attention than other models.

He had a session with our team and explained the working methodology of the exhibits. He also enlightened the people on the topics of BCD, the Fibonacci series, Pascal’s triangle (Mahameru), Mehruprasta, Base10 calculations, Base16, and Base20 calculations.

The whole session was inciting, encouraging, and enlightening. Mr. Thiyagarajan enjoyed sharing his exhibits, got fascinated with the framework of STEM land, and wanted to support us in encouraging children to invent more projects.

Reflections from the team:

Boyle’s law is a gas law that states that the pressure exerted by a gas (of a given mass, kept at a constant temperature) is inversely proportional to the volume occupied by it. In other words, the pressure and volume of a gas are inversely proportional to each other as long as the temperature and the quantity of gas are kept constant. Boyle’s law was put forward by the Anglo-Irish chemist Robert Boyle in the year 1662.

For a gas, the relationship between volume and pressure (at constant mass and temperature) can be expressed as

where P is the pressure exerted by the gas and V is the volume occupied by it. This proportionality can be converted into an equation by adding a constant, k.

The pressure v/s volume curve for a fixed amount of gas kept at constant temperature is illustrated below. 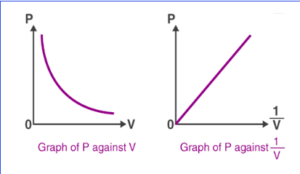 This gas law describes how the pressure of a gas tends to increase as the volume of the container decreases. We use a syringe and balloon to understand the phenomenon.

Filling water in the syringe:

Observe the difference when the balloon filled with water is within a closed system of the syringe.