states that – A resistive load, being connected to a DC network, receives maximum power when the load resistance is equal to the internal resistance known as (Thevenin’s equivalent resistance) of the source network as seen from the load terminals. The Maximum Power Transfer theorem is used to find the load resistance for which there would be the maximum amount of power transfer from the source to the load.

To verify this theorem, I have taken Vth as 10V and Rth as 5K ohms connected in series with the load resistance RL. Now I am varying the RL to get the maximum power 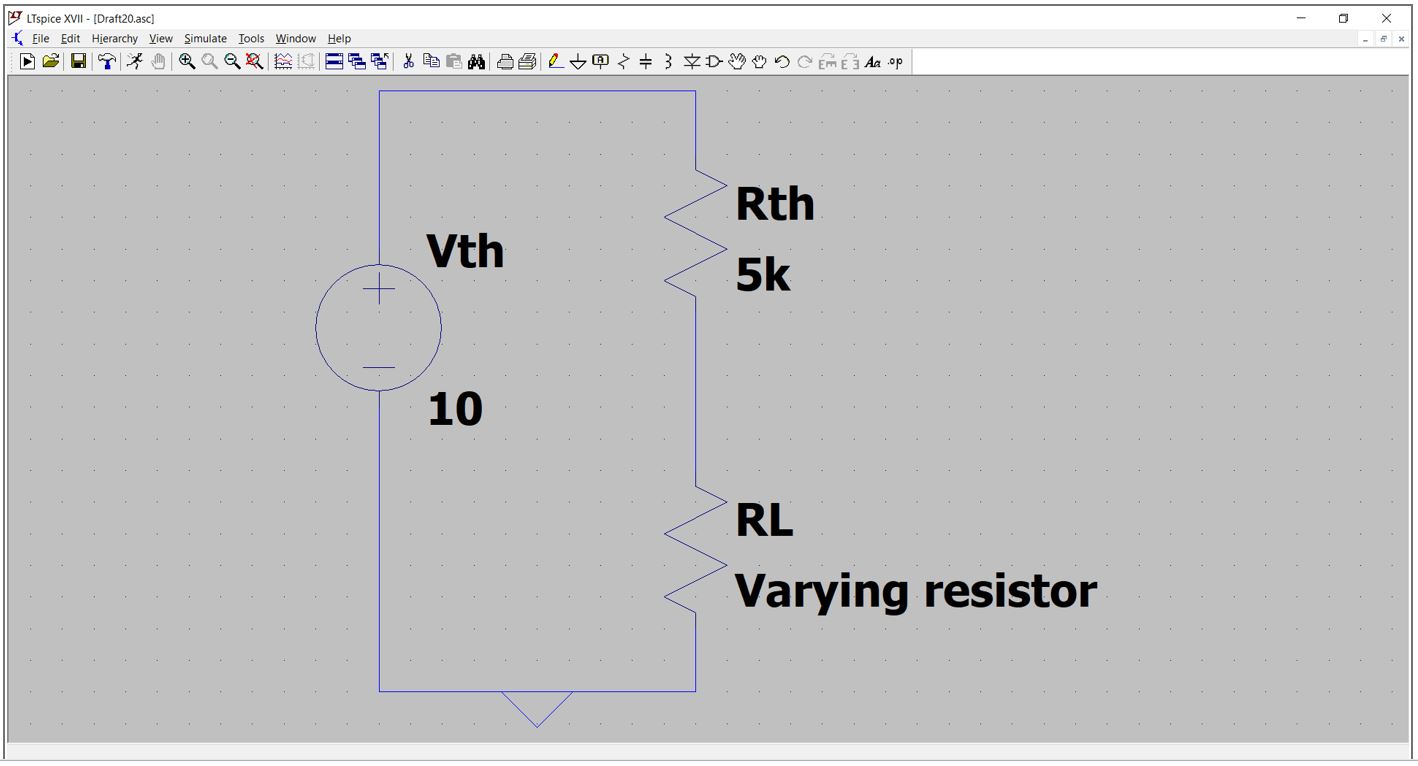 from matplotlib import pyplot as plt 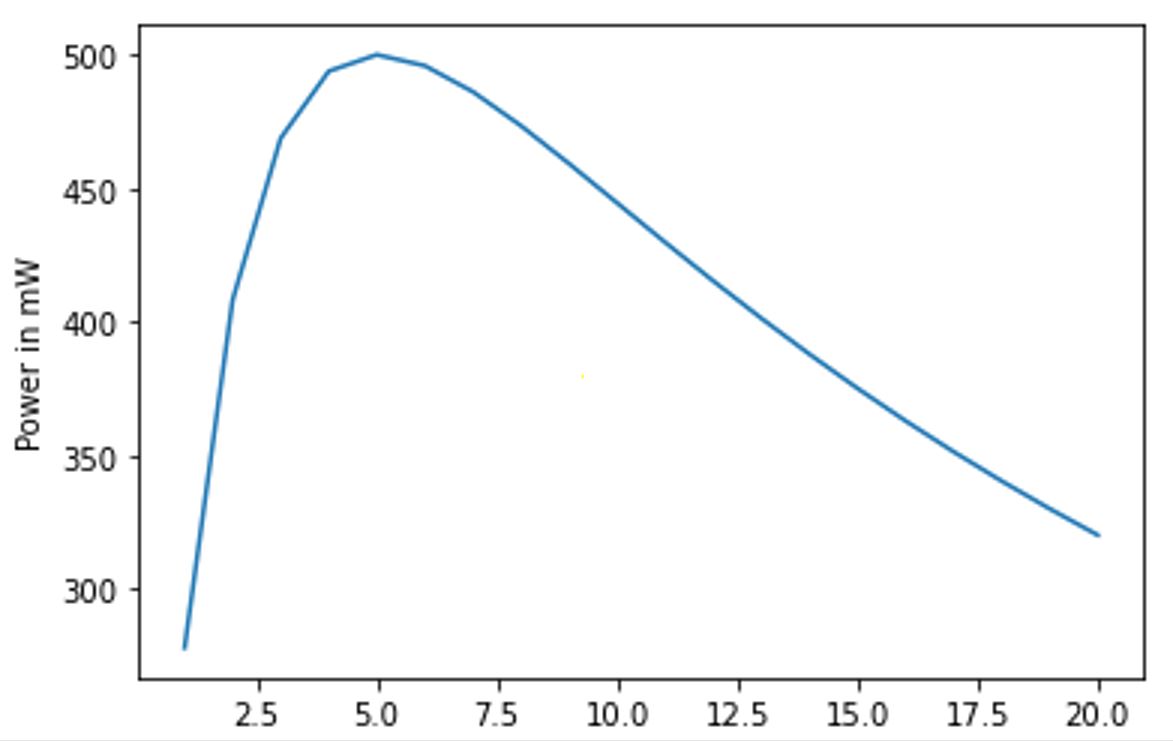 From the graph I observed that when the load resistance (RL) is equal to the Thevenin resistance (Rth) of the circuits then I able to draw the maximum power from the source. 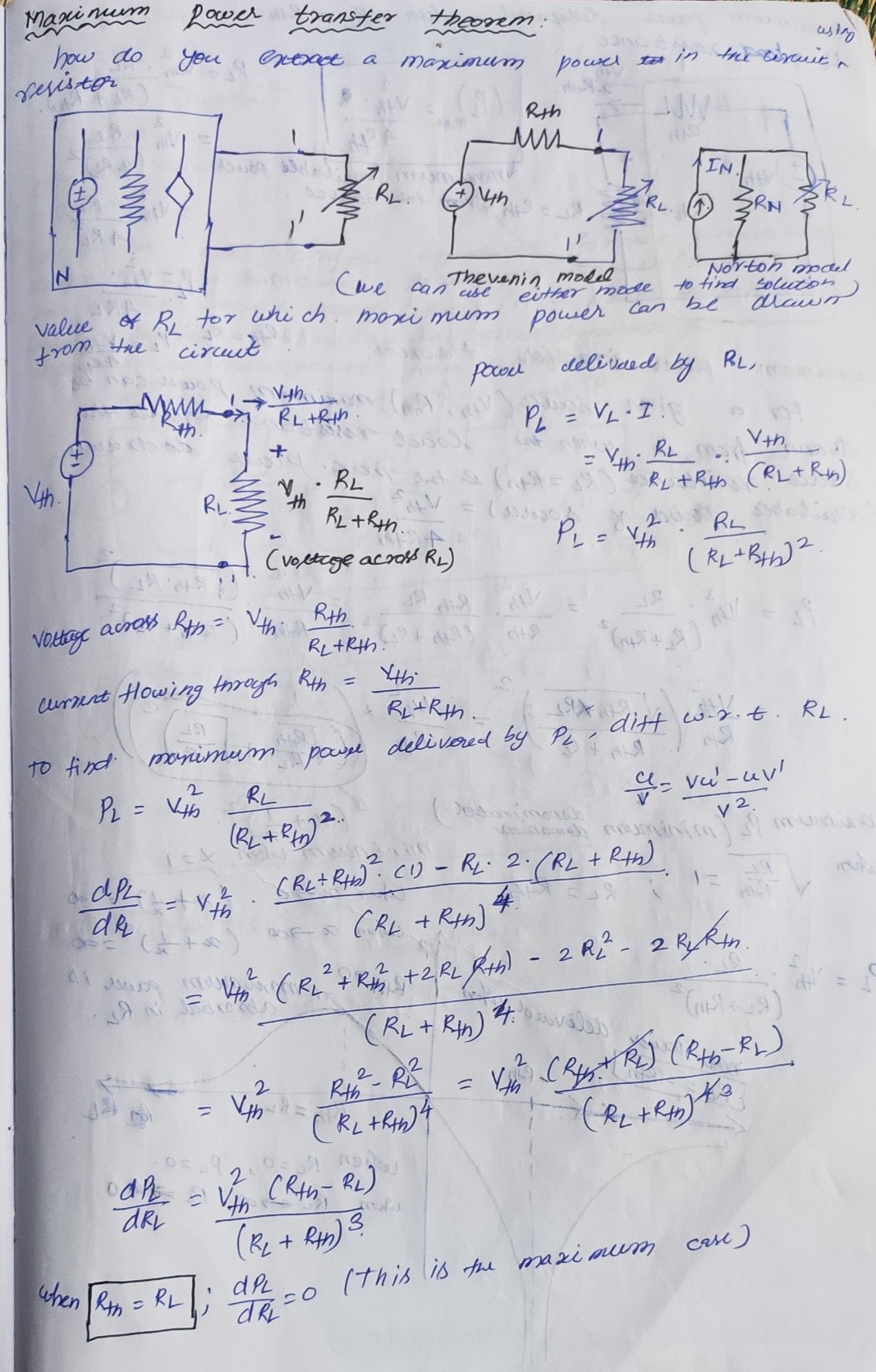 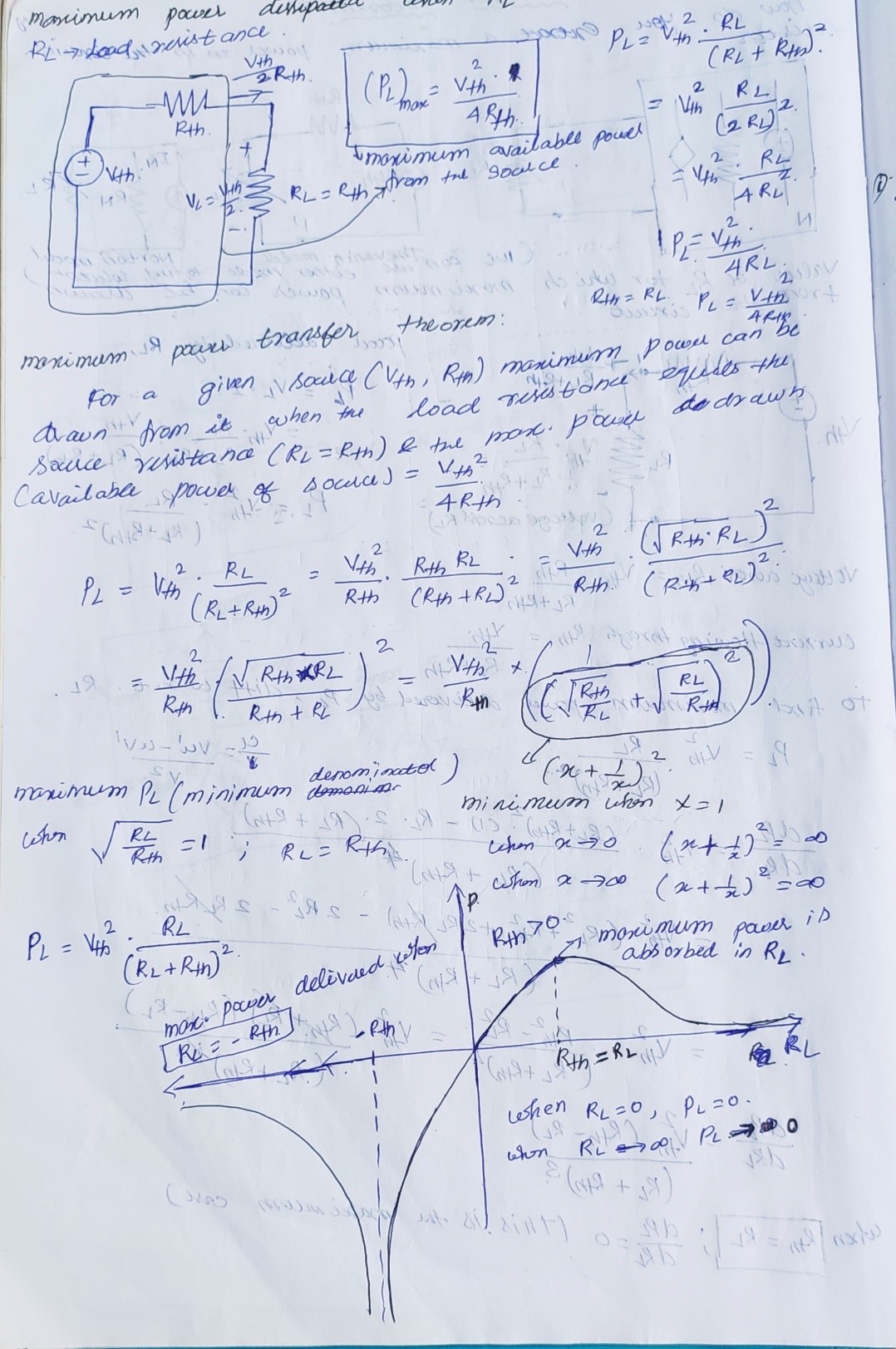 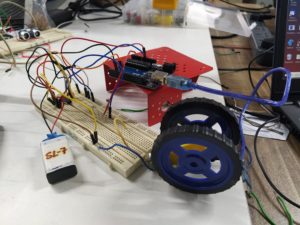 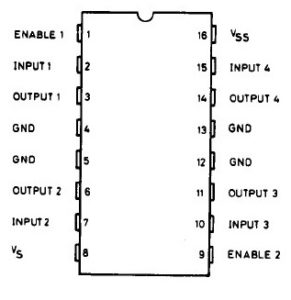 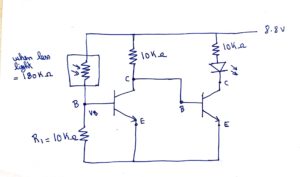 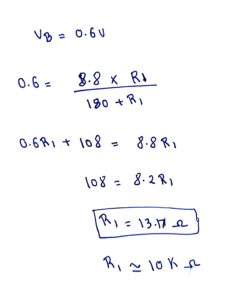 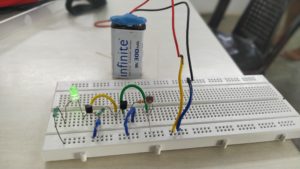 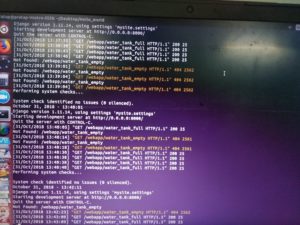 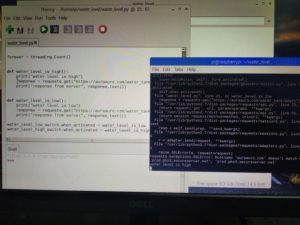 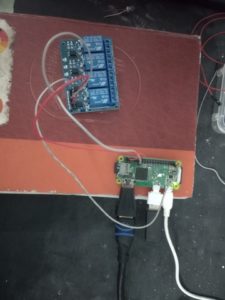 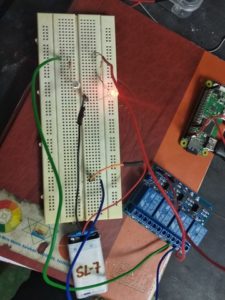 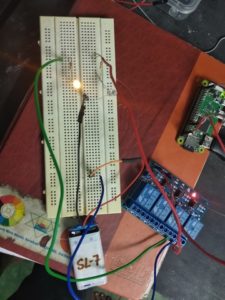 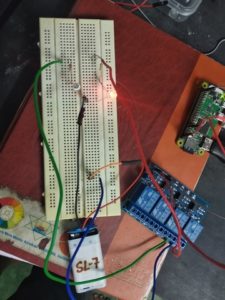 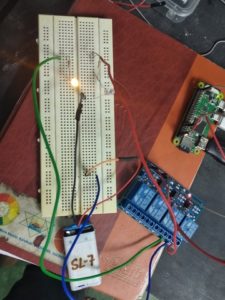 A capacitor is a two terminal passive element which stores energy.

There are two types of capacitor.

– These are small,non-polarised in yellow or orangish  in color.

How to identify these capacitor values:

The value is printed in three-digit code. The first two digits are the two most significant digits of the value, and the third digit is the exponent on the 10. The value is expressed in terms of pico-Farads.

How to identify these capacitor values and its polarization:

The value is followed by the voltage rating(maximum DC voltage the capacitor can withstand without damage).

There are two polarity indicators on an electrolytic cap:

I started designing 4-bit microprocessor in magic tool, it consists of three block:

Inputs which are used in it : 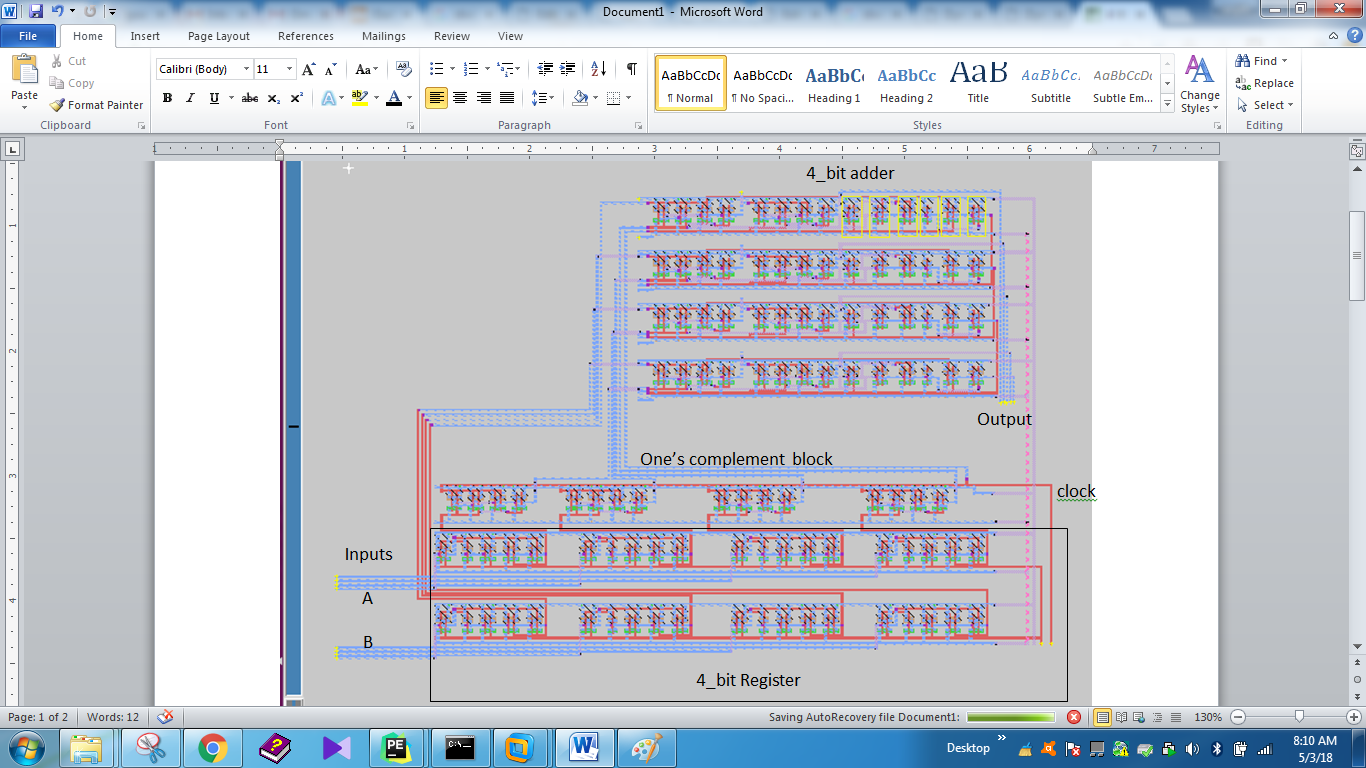 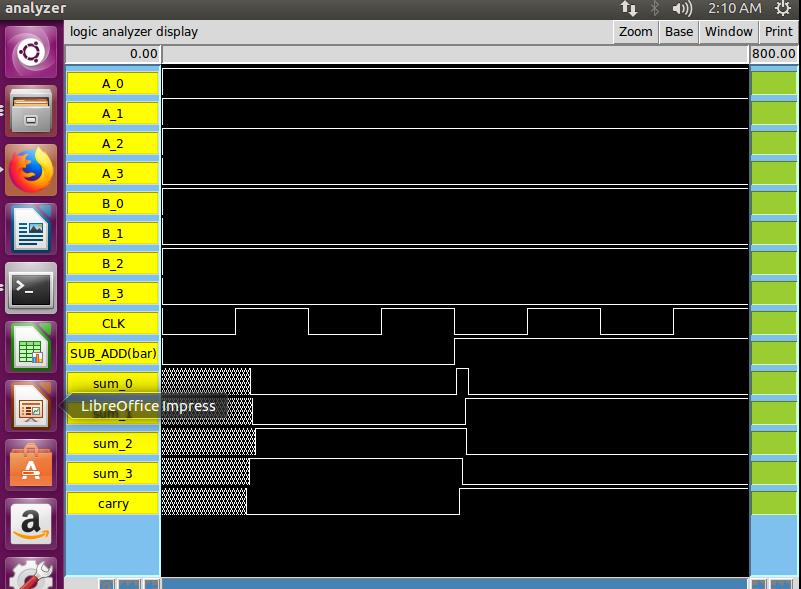 And also sanjeev taugth me, to align block in order to reduce area and to create data bus with multiplexing two inputs.

In electronics, initially I displayed my name using Seven Segment Display(SSD). I had already posted that in My First Blog. After that I wanted to learn more on SSD. So I was asked to make a digital clock. I have completed the first digit of the seconds. I used two JK flip flops (HD74LS76A), decoder (SN74LS47), a SSD (Common Anode) and Signal Generator. I first made the connections of JK flip flop on a breadboard. The input is clock signal which is generated from a signal generator of Frequency 1Hz. The combination of the two flip flops acts like a counter. Once the circuit is connected, I tested the output of the flip flop using an ocilloscope. I got the waveforms like this.

I have completed the first step only, but I feel happy that I learnt and understood what I did. I acknowledge Sanjeev, Sundhar and Ranjith for guiding me.

Sinthanai Sangamam is happened on 21/02/2018. It is a new kind of experience with around 600 teachers from different places. I have presented a paper about STEM land. The great thing is I got an opportunity to share about, my journey with the children in STEM land.The wonderful thing is that I am in STEM land. Why I came to STEM land is, I want to learn more about electronics that is why I came to STEM. I have learned about electronics what I have learnt that came as a few product that is inverter, display my name using 7-segment display, mobile charger, solar powered charger etc..Then I learned some of the programming from students that is scratch and geo gebra these program will be used in mathematics. These things I have explained in very shortly. In Sinthanai Sangamam everyone shared their experience with the children. How they interact with the children, what method they are following in their school, what kind of projects their students done and how we can connect to science and maths in our real life. The one main thing what I learnt is there should not a gap between children and teacher. 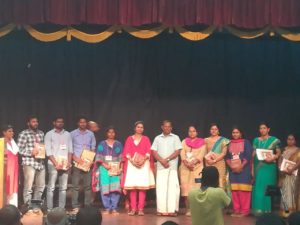 In VLSI layout course I learned to design a gates using NAND. Then I have checked the NAND gate truth table with the help of bread board, battery and multimeter. I learned to use magic tool, how to extract and how to simulate the layout. 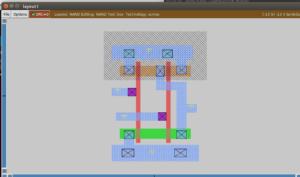 I learned the cross section of CMOS and what colour coding we have to use for the each components.