A book costs Rs. 500. The shopkeeper sells the book with 10% discount. What is the cost of the book?

7. Now, from the point that intersects the middle line from 90 draw a straight line to Y-axis.

ssh is a kind of network protocol to communicate between two or more computer. communication between client to server.

ssh is default install in all ubuntu pc’ s.

ssh -client tool to communicate to the server.

We need to install the open ssh server in the server pc’ s.

What is open ssh?

Open ssh is the server to running inside the server

Go to the terminal, and type this command

Here is the setup process for ron and roff for all system :-Setup_ron_roff_Documentation

Transferred to the next group this week 🙂 , and worked on the secret of Concentration.

The following passages were translated to Tamil and read with the children in both English and Tamil.

From the teachings of Swami Vivekananda :

To me the very essence of education is concentration of mind,not the collecting of facts.If i had to do my education over again,and had any voice in the matter,i would not study facts at all.I would develop the power of concentration and detachment,and then with a perfect instrument i could collect facts at will.

How has all the knowledge in the world been gained but by the concentration of the powers of the mind?The world is ready to give up its secrets if we only know how to knock,how to give it the necessary blow.The strength and force of the blow come through concentration.There is no limit to the power of the human mind.The more concentrated it is,the more power is brought to bear on one point;that is the secret.

Do you see,simply by the observance of strict brahmacharya(continence)all learning can be mastered in a very short time-one has an unfailing memory of what one hears or knows but once.It is owing to this want of continence that everything is on the brink of of ruin in our country.

Take one idea,Make that one idea your life;Think of it,dream of ir,live on that idea.Let the brain,muscles,nerves,every part of your body,be full of that idea,and just leave every other idea alone.This is the way to success,and this is the way spiritual giants are produced.Others are talking machines.

How are we to know that the mind has become concentrated?Because the idea of time will vanish.The more time pass unnoticed the more concentrated we are.In common life we see that when we are interested in a book we do not note the time at all; and when we leave the book,we are often surprised to find how many hours have passed.

During the whole week(201906 22-29) and the sleep over the children worked on creating their own drawings and depicted the following story. 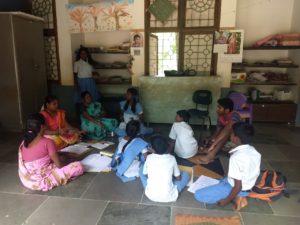 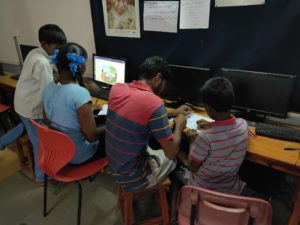 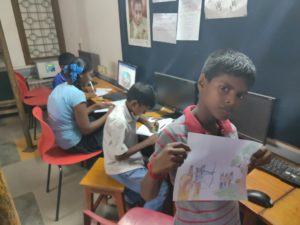 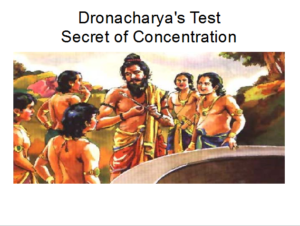 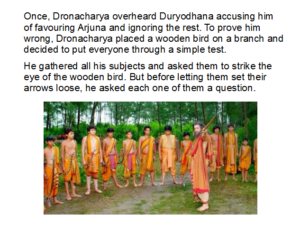 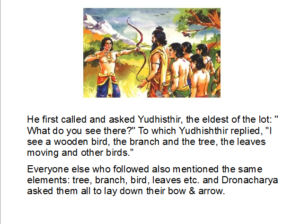 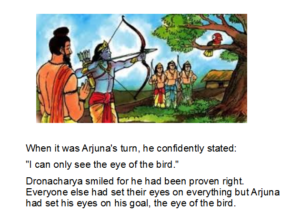 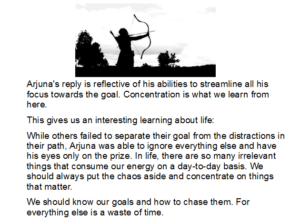 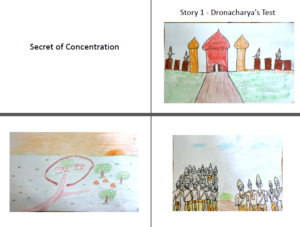 Recitation work from the children: 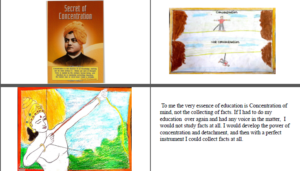 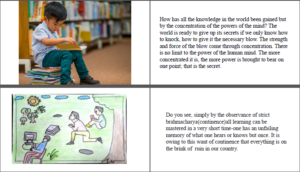 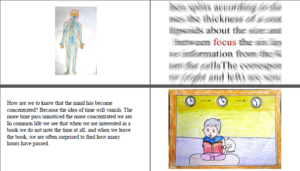 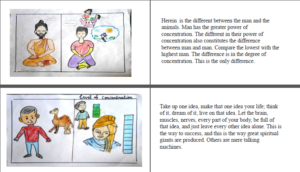 The teachers and children together worked on scripts to show all the seven points as a play. 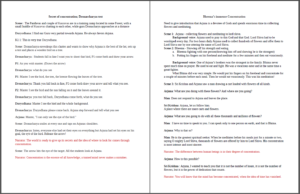 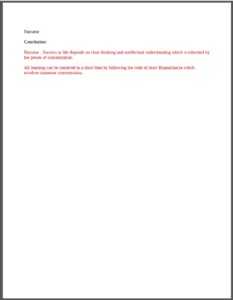 At Isaiambalan school a project on value with Swammy Krishnan Maharaj was started last week(20190615) and children along with teachers were split into six groups each with a specific title . Our group was given the topic “True Education” whose avatar was “Narasimha”. Each group had a set of values and their corresponding meaning in terms of the groups name. 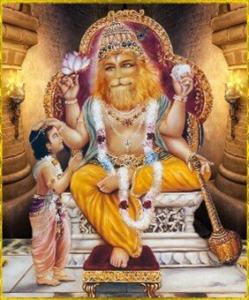 The following was ours:

1. Respect: Respect your parents, teachers, and elders
2. Love: Love your Country, your culture and your ancestors
3. Self Discipline: Discipline your body, your senses and our mind.
4. Self Control: Control your words, your thoughts and your actions.
5. Faith:Have faith in yourself, in others an in god.
6. Discrimination: Discrimination between good and bad, real and unreal, vice and virtue.
7. Concentration: Concentrate whole heartedly while studying or playing.
8. Truthfulness: Be truthful in words and actions.
9. Hard work : Work hard to acquire knowledge, skills, and wisdom.
10. Strength : Be strong physically, mentally, intellectually, morally, and spiritually.
11. Conviction: Have conviction in the power of goodness, purity, and honesty
12. Devotion: Have devotion for duty, scriptures, holy people and God.
13. Habits : Cultivate regular habits of prayer, meditation, and reading inspiring and strengthening literature.
14. Same Sightedness: Feel the presence of the divine in all beings and treat them with the same standard as you treat yourself.
15. Firm Determination: Have firm determination strong will power to cultivate good habits in order to achieve permanent happiness, peace, success and fulfillment in life.

Children were asked to write what they understood of these and we shared in group what it meant for each person and translated it to Tamil.

Today(20190622) we read the story of Prahlada and the children were asked to reflect on it by next Saturday.

During sleep over (26/06/2019) our team drawn the story. In that story we captured the main thing and drew it. Whatever question we had regarding the story we asked and it got clarified by Anita. On saturday (29/06/2019) we discussed the question we came up and it got clarified. We started preparing the script for drama. We wrote a script with help of our children and teachers.

(placed the extracted file in downloads)

2017 – 2018 batch children from Udavi had a get together. We’ve planned to meet them and have a conversation on how STEM land was useful for them and what they feel about STEM land. Children were in their summer holidays and organised a get together themselves. We all felt happy to see them back. We met them in our lab. Children were also happy to meet their friends again. We started the conversation by asking them “What do you remember or miss about STEM land and how is it used?” Children shared what they did in STEM land, they shared about their projects and what they learned. Most of them said they learned Scratch, Rubiks cube, Goanimate, solve puzzles and Alice . Some of them said they miss STEM land. 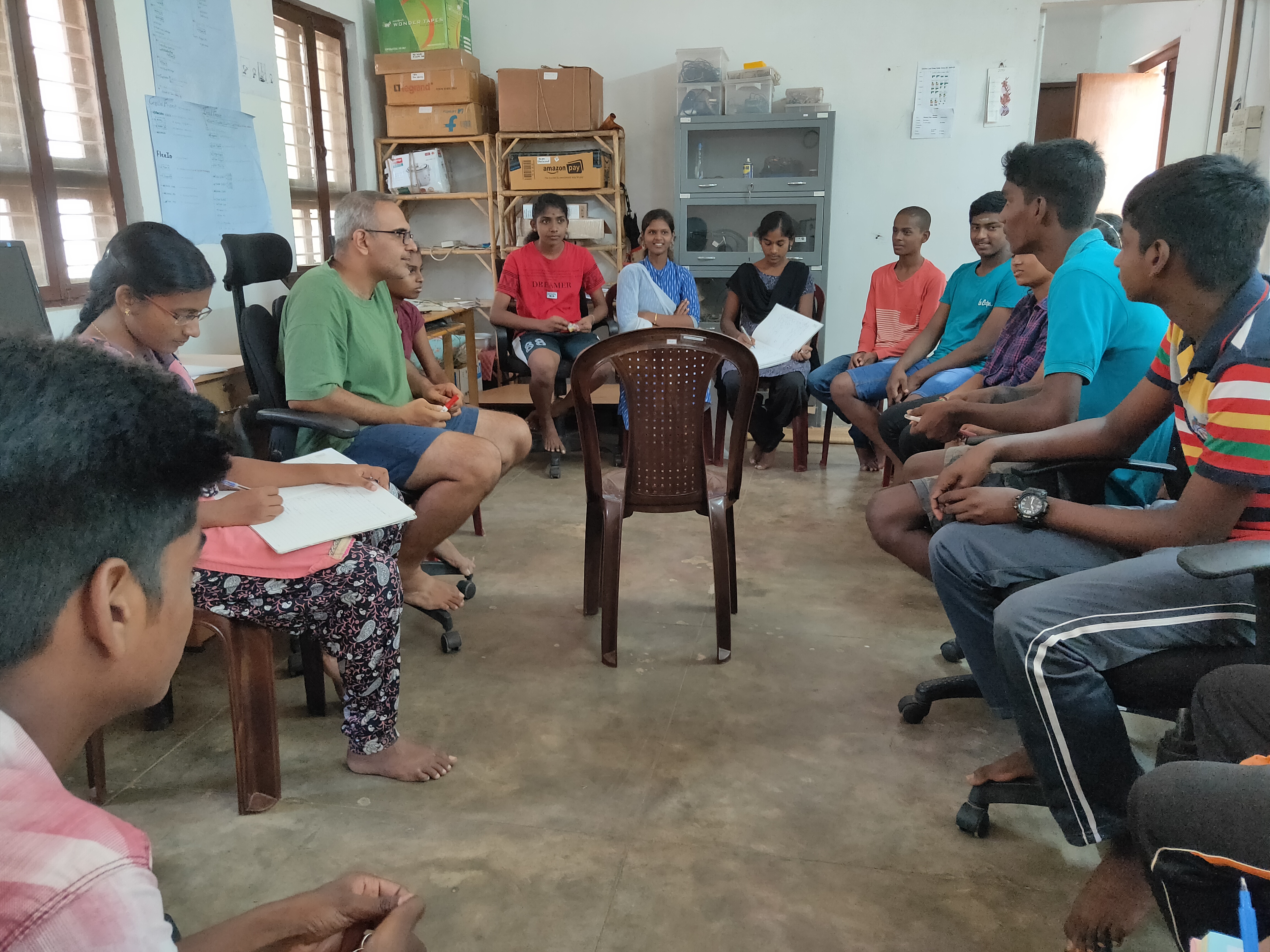 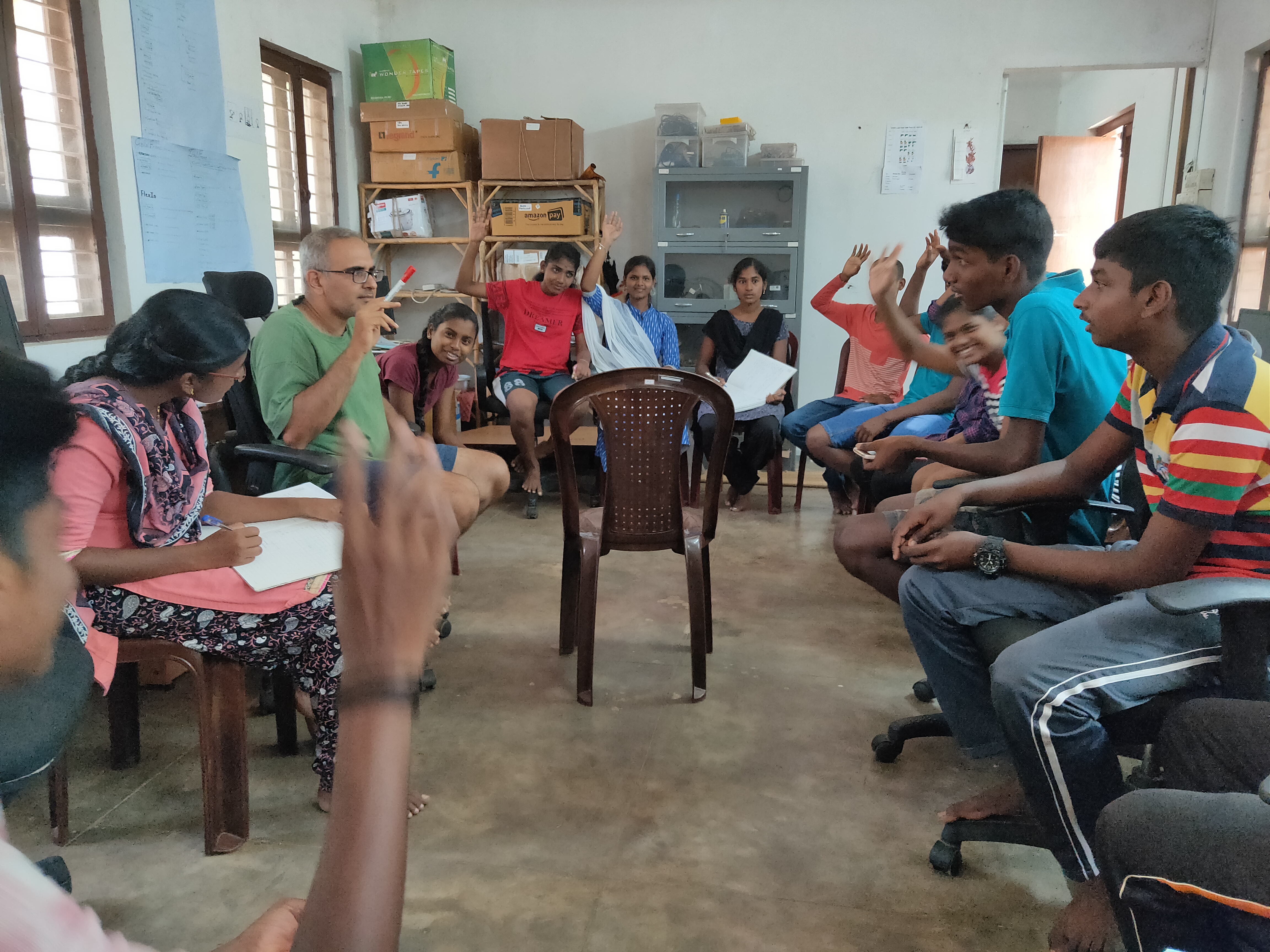 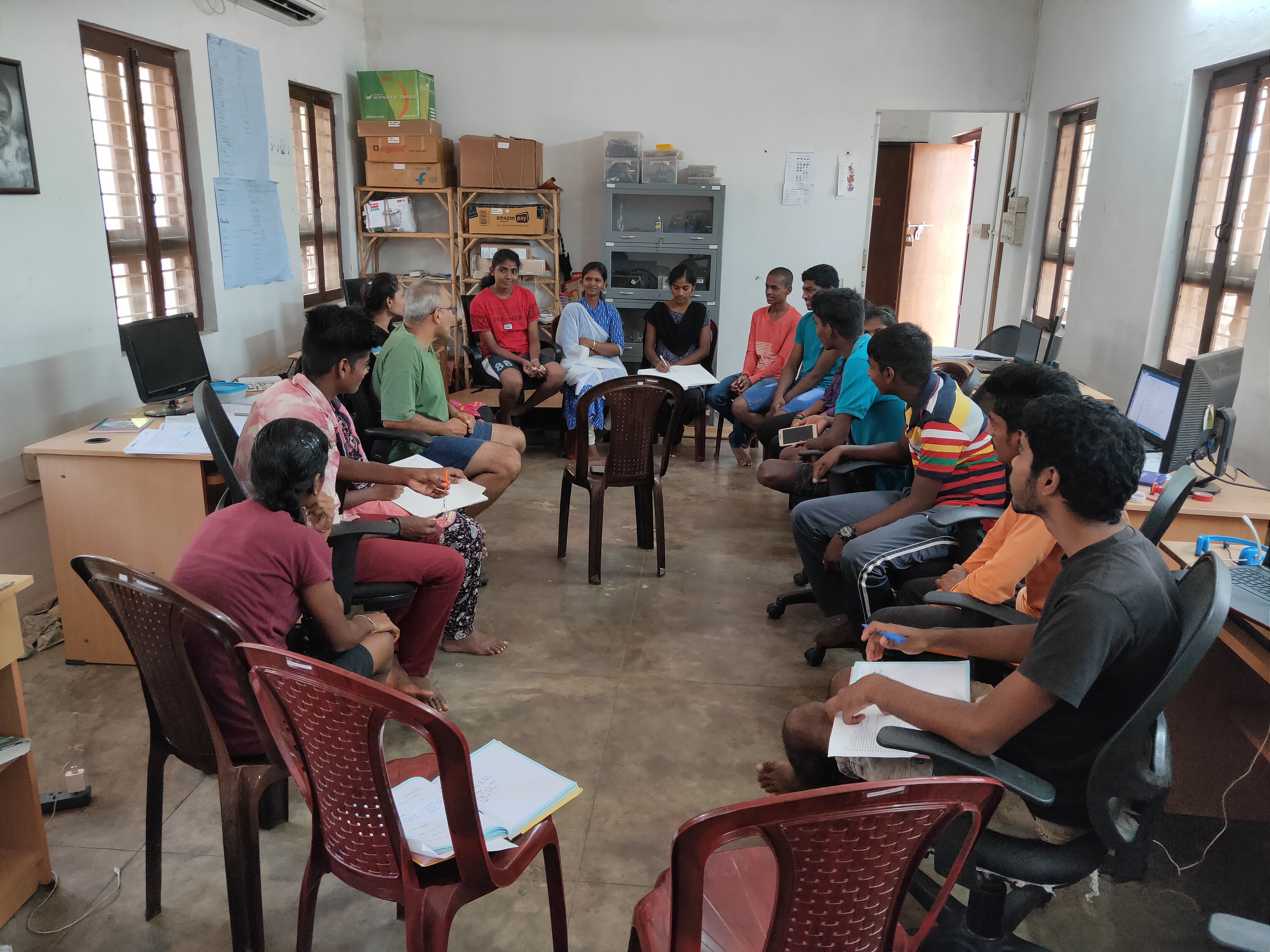 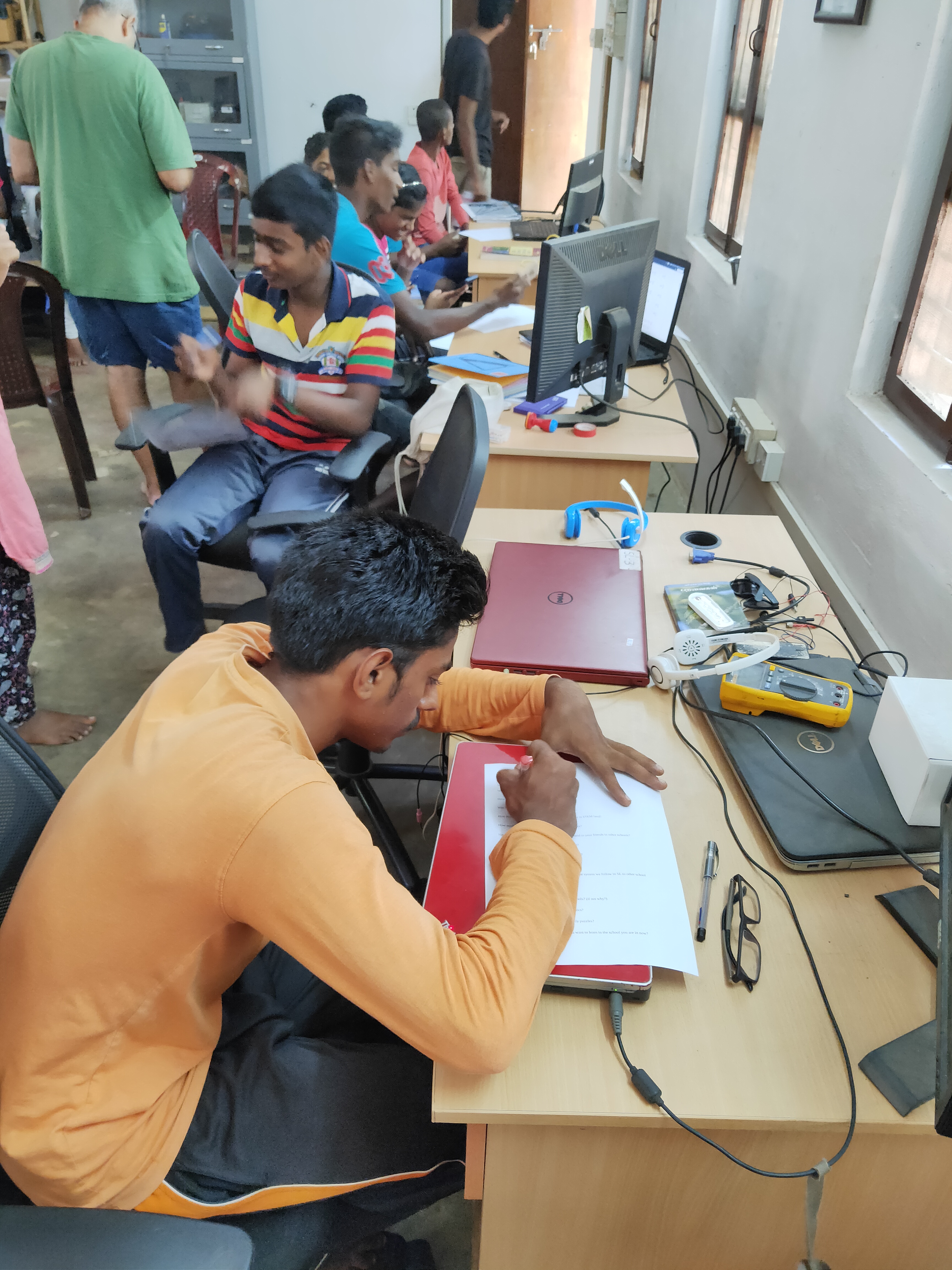 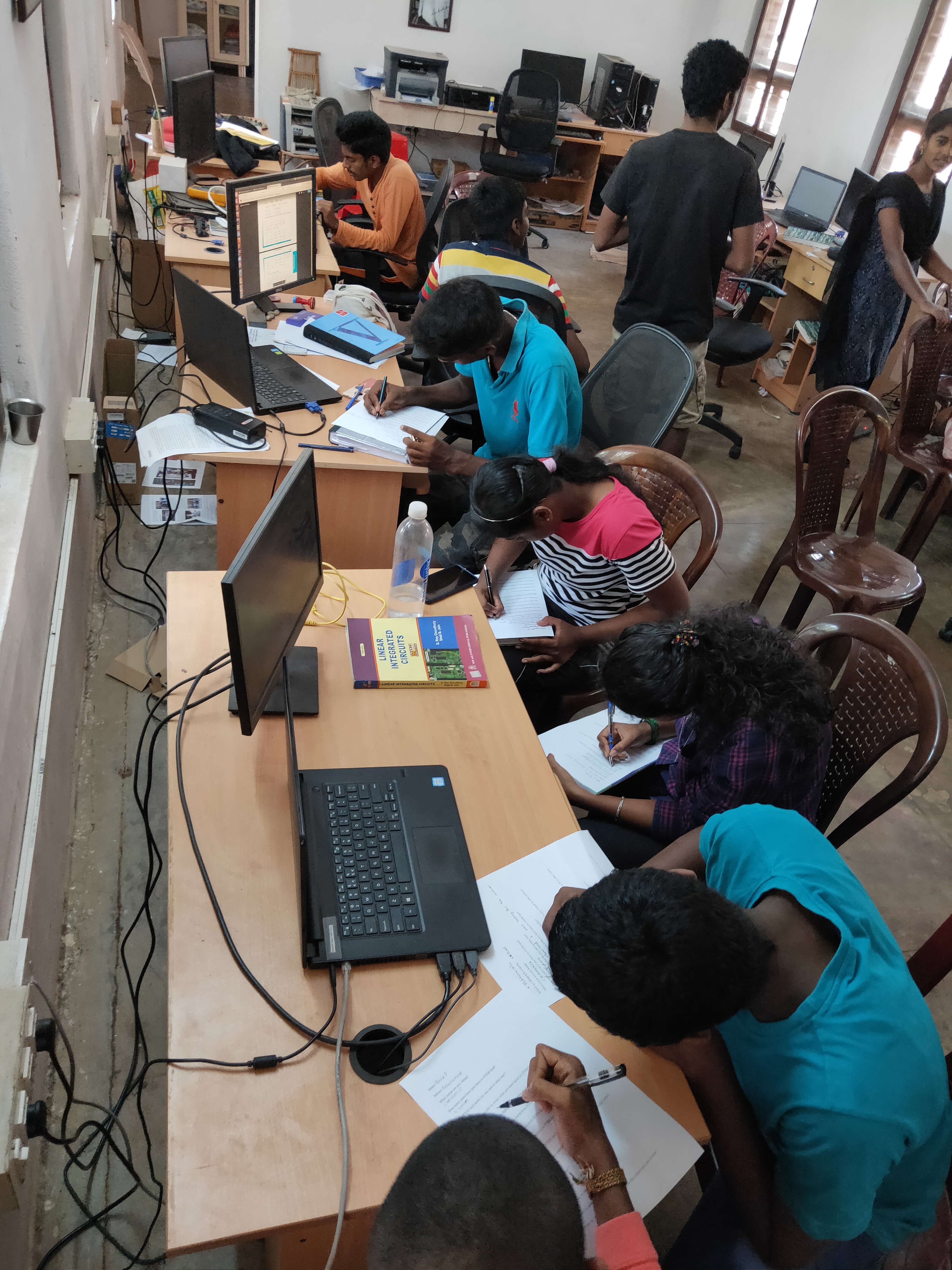 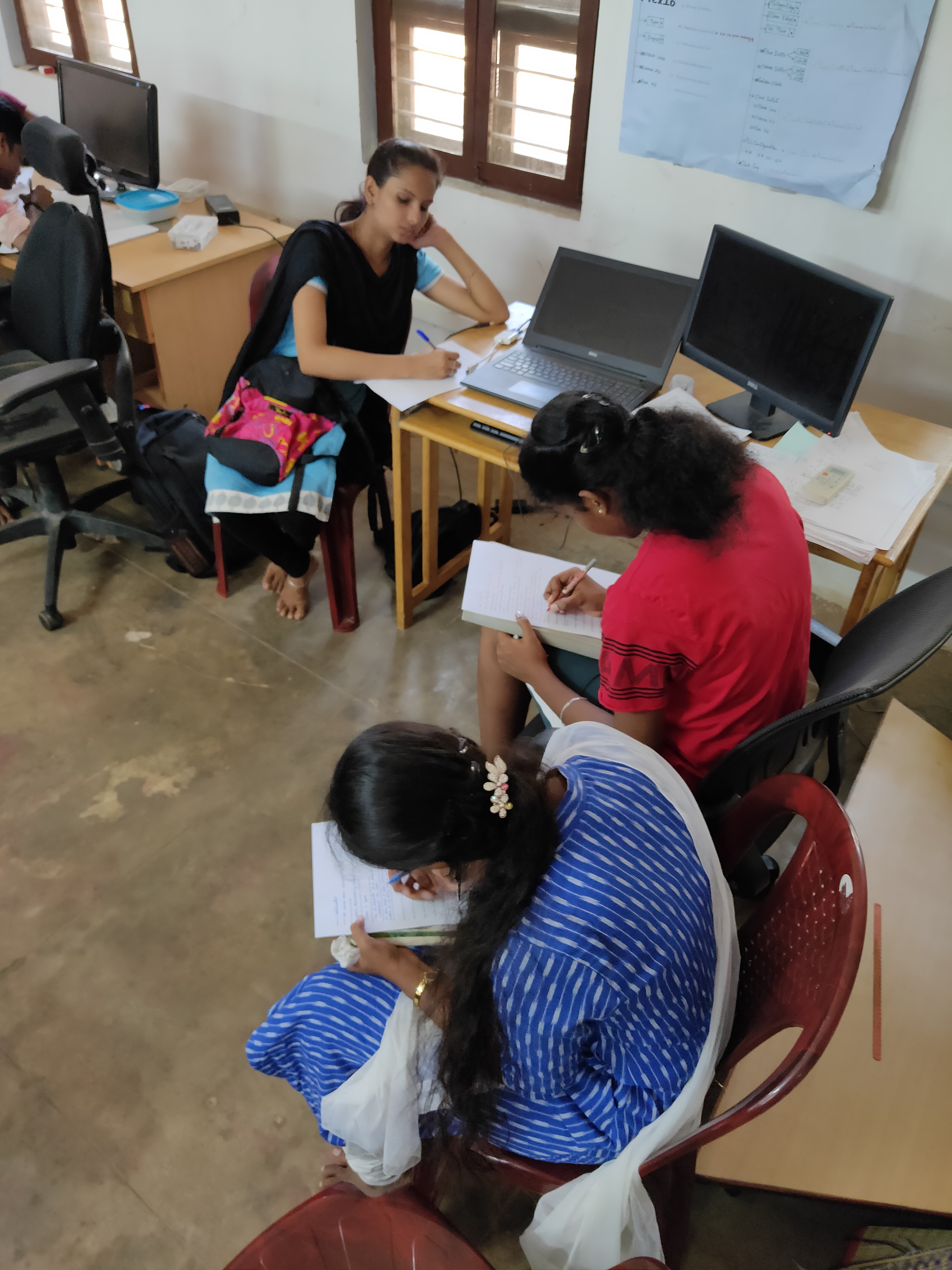 In STEMland we give freedom to children to choose their plan on their own.  Using the software children choose their plan for a week and they will work according to their plan. We build a software for children to track their progress. The software which we built was having small issues on uploading data also we did it manually, so we wanted to do it automatically.  We got suggestion from our team and children. It took 4 months to complete the new school software.

We had a session with 9th Grade on New school software. Children said it was more comfortable than the old software.

7th Grade children are new to STEM land, so we wanted them to start from Scratch. We explained what is STEM land and ground rules of STEMland. Sundar and Logeshwari started the Scratch course and I supported them to organize the laptops in STEMland. There were five groups. In each group they gave one task. 6 Children from 7th Grade choose to come at during their activity period also. During the activity period they were doing their scratch project eagerly and I supported them to complete their task.