At first the children did a seven segment display(SSD) board which displays StemLand on it by lighting it up using a 9V battery using a corresponding resistor in series. After that we(Anishvathi,Sangeetha,Praveen,Sharmila,Fevina- 8th Grade Students) properly soldered the SSD on a pcb board . We wanted to make the ssd to light up in various ways. So, we used an arduino pro-mini to program the SSD to blink in various ways .We used a battery which was 9V but if we had given the 9V directly it would burn out the arduino board and the SSD.So, we used a 5V voltage regulator which will give us 5V at the output from a 9V input from the battery. Where the output of the regulator is fed to the input of the arduino board. The board worked smoothly. After a few days the battery discharged so we had to change a new battery . 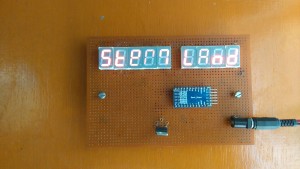 (Praveen holding the solar panel and displaying how it works)