On Tuesday 9th and 10th had activity class. Children from 10th wanted to make a magnifying glass. They took a plastic bottle and carefully cut out two circles. They joined those two circles at the edge using glue gun and left a small gap. They dip it into a glass of water and filled it. But they found that the water was leaking. They tried it again using Fevistick. Their exploration creative ideas were really inspiring. With the remaining parts of the water bottle that was been cut were been joined together and formed a mini water bottle.They put some mud inside the bottle and kept a flower and few grass and made it as a flower vase. 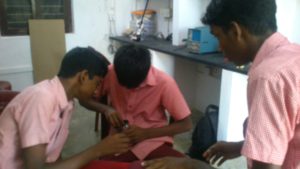 On the other hand a 9th student had a mobile phone which was not working. He found that the battery was not charging properly.One of the wire that goes to the battery was broken. He soldered it and charged the battery and turned it on. It was great to see that the mobile gave and sound and turned on. He called everyone who were there in the room and showed them that he made it to work. He was so happy to see that it was working. 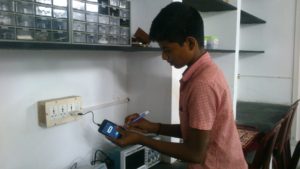