The values of these trigonometric ratios can be calculated using the measure of an acute angle, θ in the right-angled triangle given below. This implies that the value of the ratio of any two sides of the triangle here depends on the angle. We can alternatively find the values of these trig ratios. Also, only the base and perpendicular will interchange for the given right triangle in that case.

Concerning θ, the ratios of trigonometry are given:

Sine: Sine of an angle is defined as the ratio of the side opposite (perpendicular side) to that angle to the hypotenuse.

cosine: The cosine angle is defined as the ratio of the side adjacent to that angle to the hypotenuse.

Cosecant: Cosecant is a multiplicative inverse of sine.

Secant: Secant is a multiplicative inverse of cosine.

Cotangent: Cotangent is the multiplicative inverse of the tangent.

The above ratios are abbreviated as sin, cos, tan, cosec, sec, and tan respectively in the order they are described. So, for Δ ABC, the ratios are defined as: 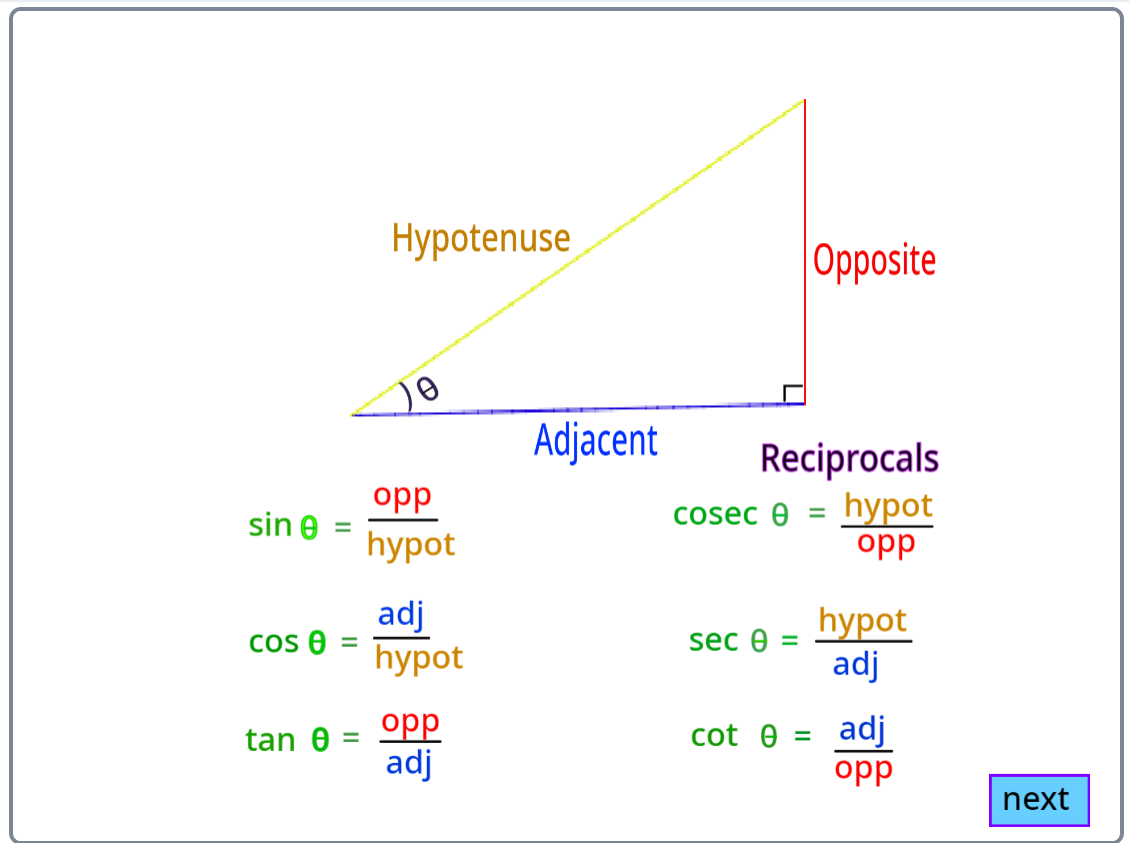 Unit circles can be used to calculate the values of basic trigonometric functions- sine, cosine, and tangent. The following diagram shows how trigonometric ratios can be represented in a unit circle. 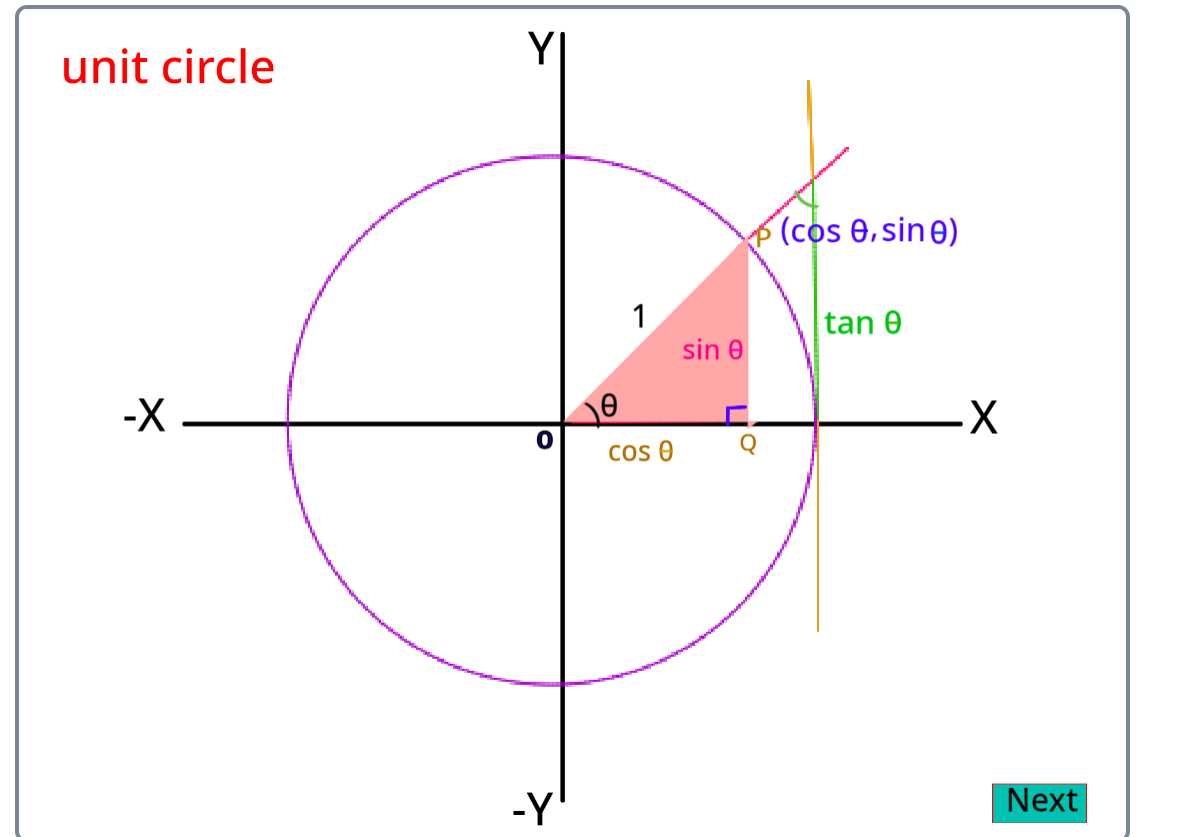 Hence, from the above equation, we can say, 180 degrees is equal to π radian.

Usually, in general geometry, we consider the measure of the angle in degrees (°). Radian is commonly considered while measuring the angles of trigonometric functions or periodic functions. Radians are always represented in terms of pi, where the value of pi is equal to 22/7 or 3.14. 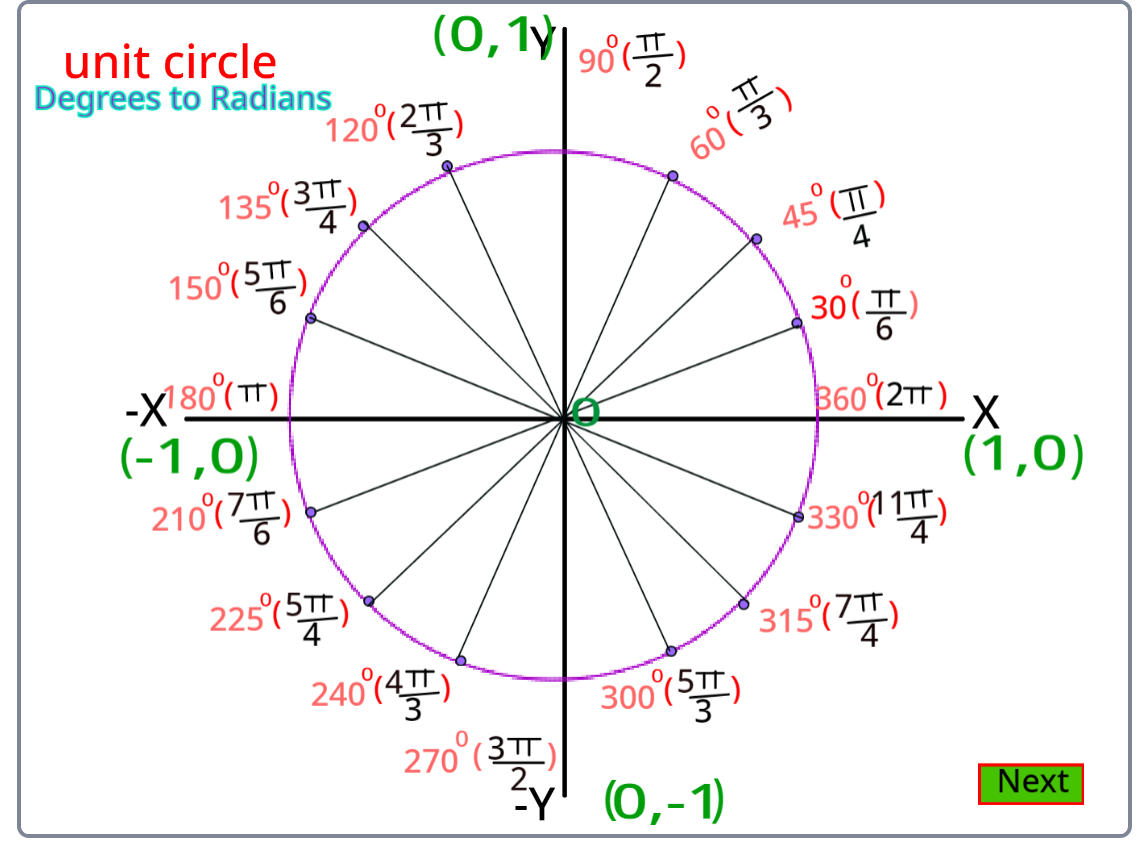 Trigonometric ratios of some special angles: 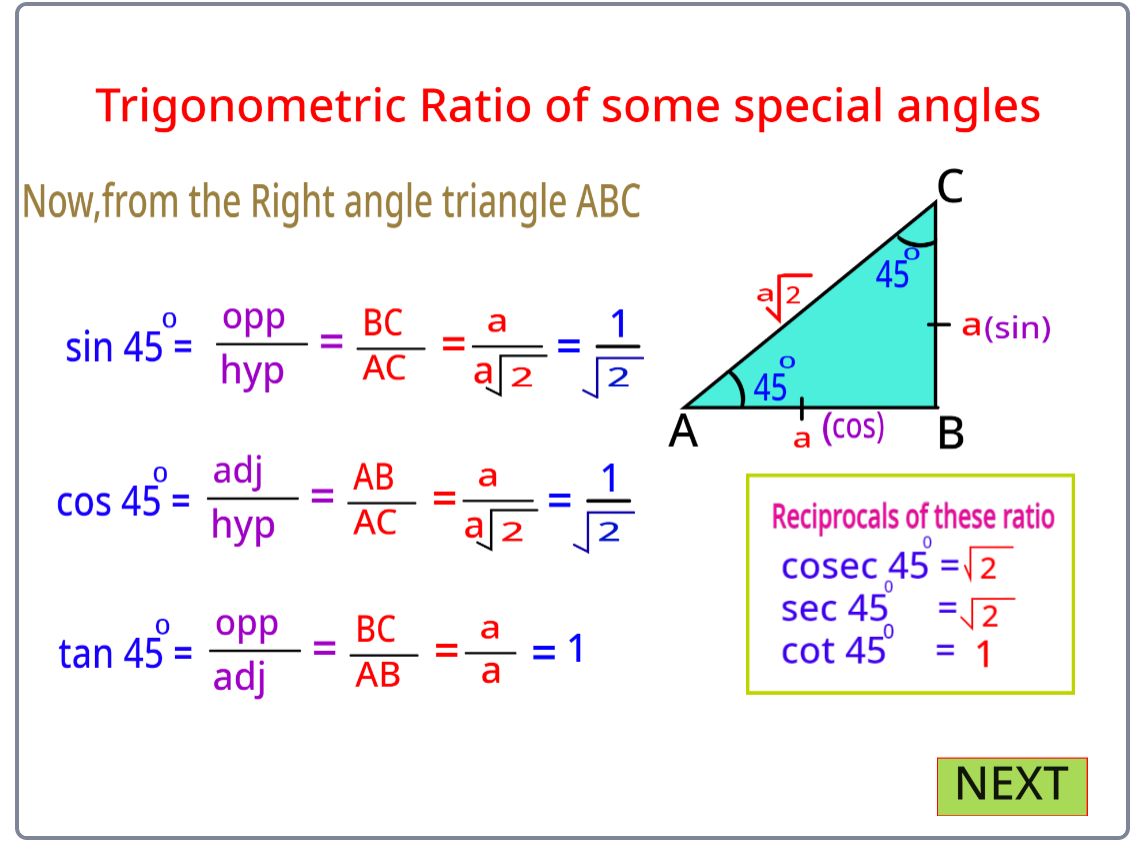 The trigonometric ratios of 30° and 60°simulated using the scratch program are shown below. 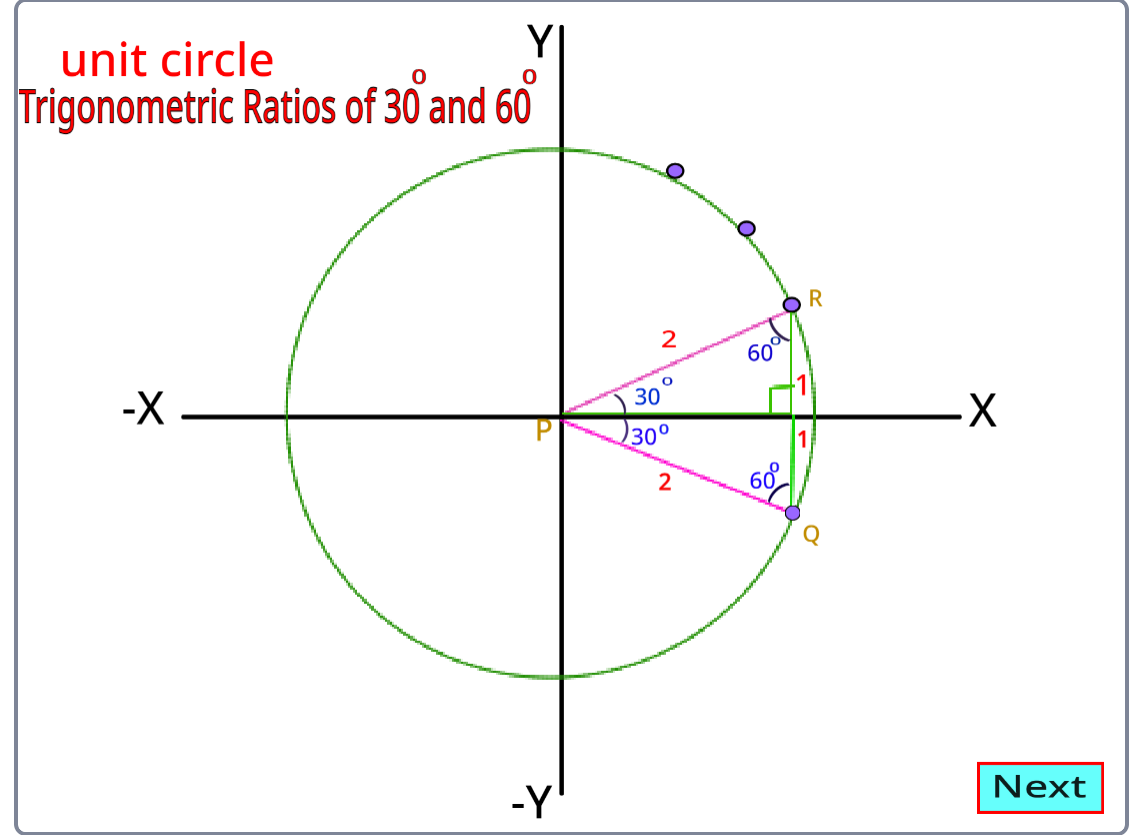 The trigonometric ratios of 90° and 0° using scratch programming are shown below. 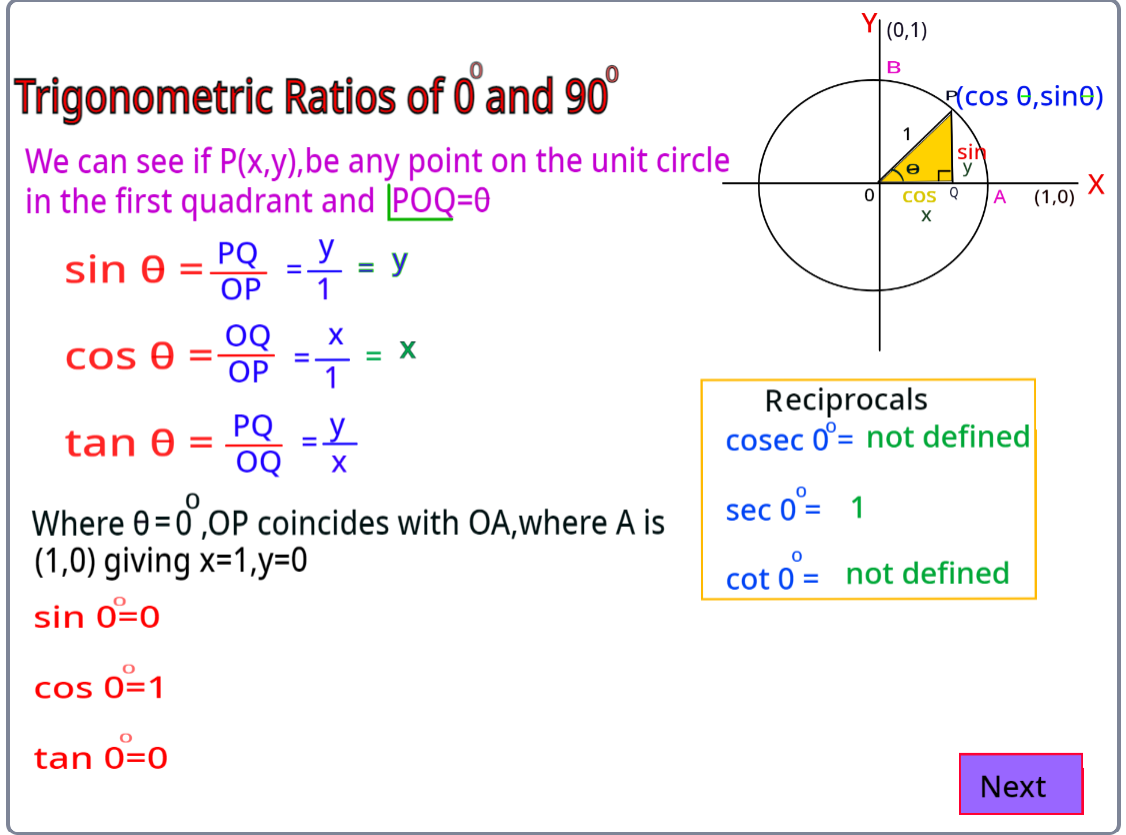 Trigonometrical Ratios of 0 degrees are commonly called standard angles and the trigonometrical ratios of these angles are frequently used to solve particular angles. In ∆ABC is a right-angled triangle. If the length of the side BC is continuously decreased, then the value of ∠A will keep on decreasing. Similarly, the value of ∠C is increasing as the length of BC is decreasing. When BC = 0, ∠A = 0 , ∠C = 90° and AB = AC. 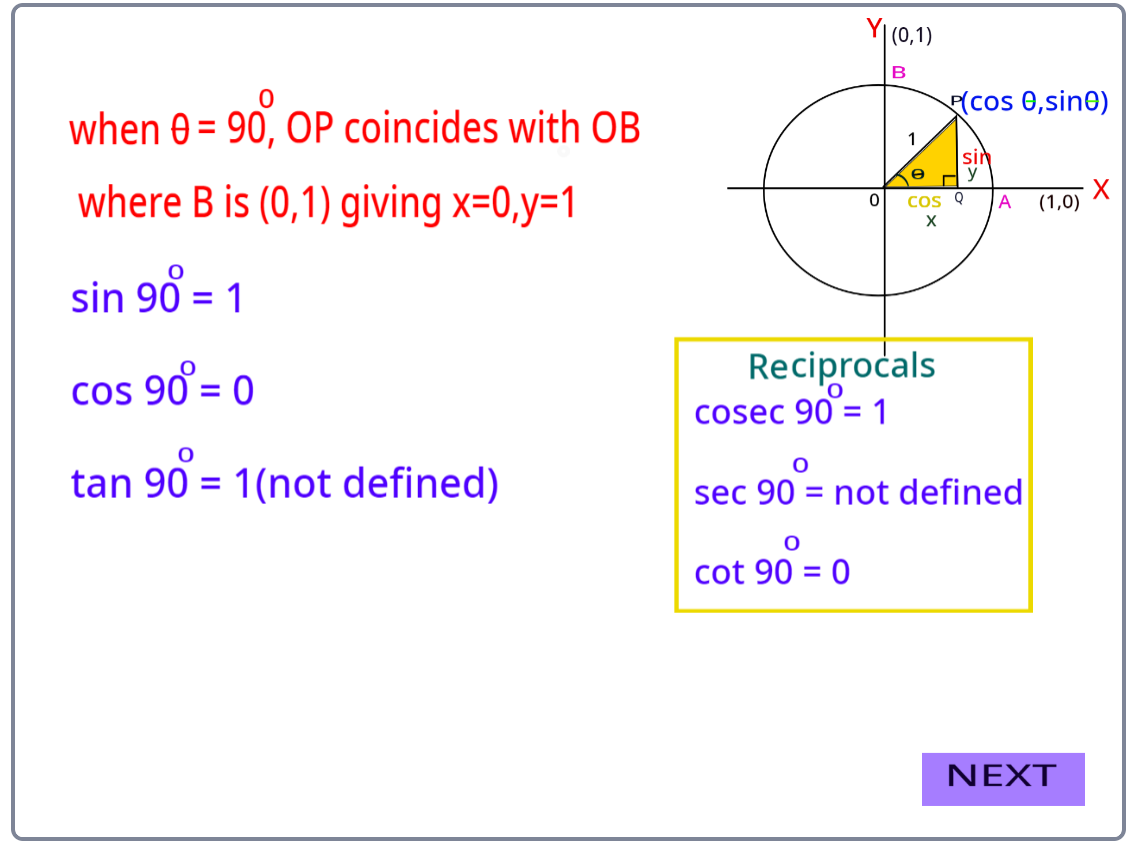 The summarization of the value of trigonometric ratios for specific angles is in the table below: 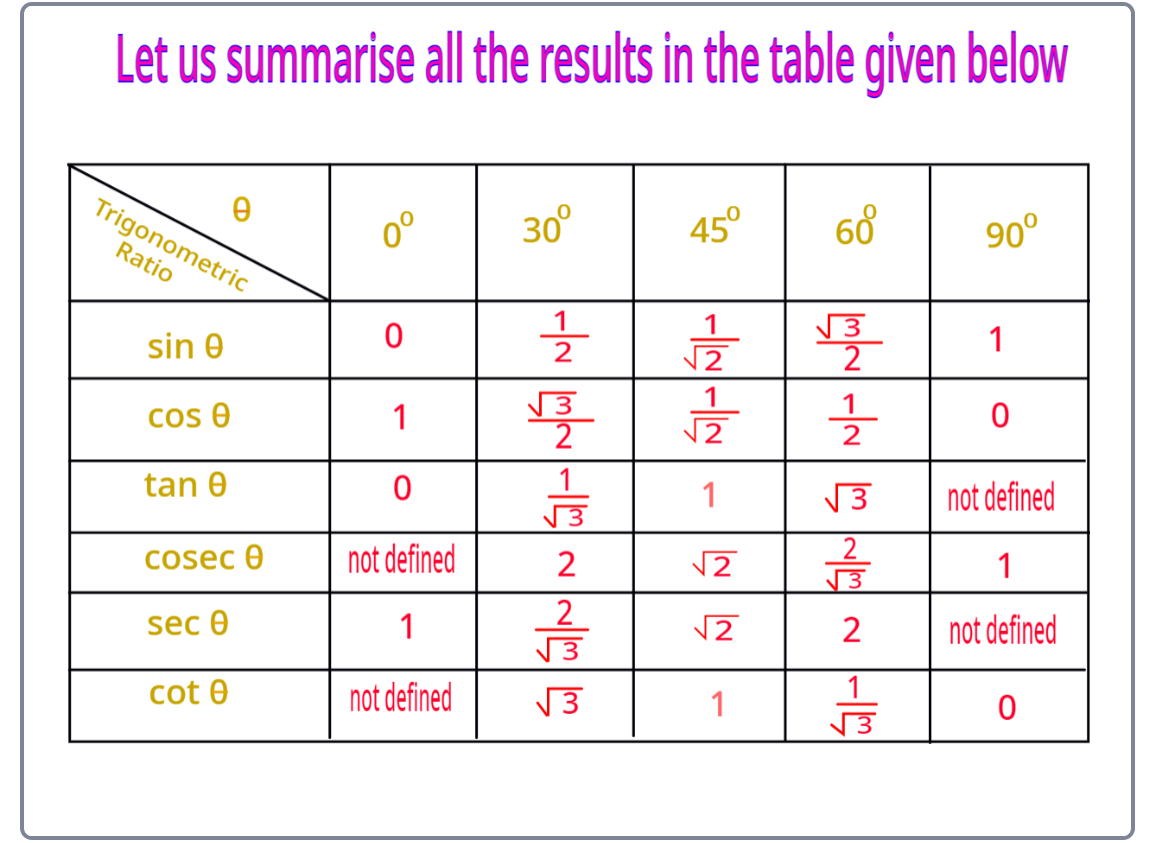 Some of the applications of trigonometric ratios are: