In Stemland we got a car battery that was used, and to put it to use we came up with a project of creating a Power supply with various output voltages. To drive  different Circuits with the different potentials. This Project was taken up along with Punithevel (7th std student from Udavi). So to get started, we put together a plan with four output’s. then we decided on the components that we needed and made a list. It consisted of four different power IC’s, connectors and adaptors along with wires. Punithevel had to look up the data sheets of the Power IC’s to figure out the pin configurations for them. Then he came up with the following circuit design. 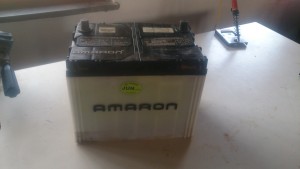 The fun part started here when we tried to hook it up on a PCB all the adaptors pins were too big for the given hole on the PCB. Then we put use of our driller set from Stemland and made the required hole at various points on the boards.

All the wirings were done taking black for the negative terminal and red for positive terminal. once done the wiring were fragile, and came off when handled roughly. We had the right solution 🙂 the heat gun was put use and the board became robust.

Then we hooked up our board to the work bench again drilling holes and screwing them firmly. following is a picture of the PCB created. We tested it with a multimeter and got the expected output’s, now It works 😉 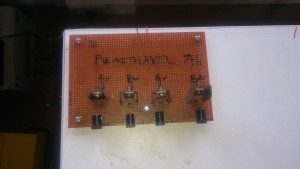