He demonstrated briefly the concept of squaring the circle can be done using the Rajju ganit method. Using the rope, a circle, and a square of the same area can be constructed and observed.

There are two main new features: 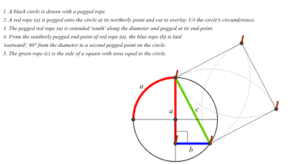 Some other interesting topics that were presented at the conference were trigonometry in Ancient India and how that led to many discoveries and applications.

Trigonometry in India is called Jyotpatti.” Ja” means chord in a circle and “Jia” means string in a bow. Mathematicians used this to find the relation between the arc of a circle and the chord of a circle. The sine function is ubiquitous in all disciplines. It is very important to study the application part of sine and cosine functions.

Bhaskara’s metaphor for sine and cosine:

Bhaskar Acharya is a 12th-century astronomer and mathematician. He brought in the importance of science in astronomy, and the application of it is beautifully brought out with a nice simile.

Just as fabric(pata)is made up of crisscrossed threads Likewise the spherics or science of astronomy is crisscrossed with sine and cosine functions.

Sines and cosines are everywhere in astronomy:

Interestingly, sines and cosines from the earliest times were formally a part of astronomy rather than a separate discipline of mathematics, it is because applications in astronomy fall all over the place.

The main phenomenal applications such as 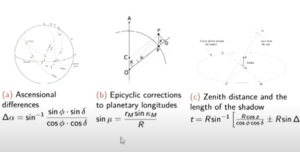 Arcs and chords: The origins of trigonometry in India:

In the 17th century, a famous mathematician named Nityananda Sarvasisiddhantaraja explicitly links the advantage of looking at half chords.

Mathematicians paid more attention to what a chord concerning a given arc is, What is half of the chord of double the arc, and the right-angled triangle which is used for mathematics and computes various line segments concerning half of the chord made computations much easier for astronomers.

The evolution of trigonometry in India:

Addressing these led to brilliant discoveries and the results from the middle.

Mathematicians like Brahmagupta, Aryabhatta, and Varahamihra have given the tables of sine and their geometric dimensions of it.