An arithmetic progression or arithmetic sequence is a sequence of numbers such that the difference between the consecutive terms is constant.

This can be observed visually using a graph. If an arithmetic sequence is plotted in a graph lies on a straight line. There is a finite distance between points.

For plotting in a graph, the sequence is written as in the following table.

The plotted point of an AP is shown below: 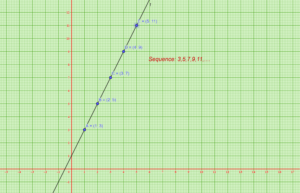 In AP, we will come across some main terms, which are denoted as:

The AP can also be written in terms of common differences, as follows;

where “a” is the first term of the progression.

Where “d” is a common difference. It can be positive, negative, or zero.

The nth term of an AP

The formula for finding the n-th term of an AP is: 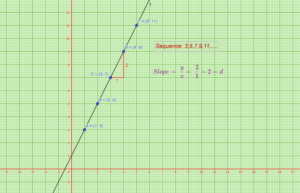 The proof of the sum of n terms can be visualized and derived using the area concept. This can be implemented and observed in GeoGebra.

Suppose we arrange the terms in the AP as shown in the figure we can calculate the area to find the sum of the first n terms in an AP.

This is can be done in two methods:

1.Using the area of the trapezium

2.Using the area of the rectangle.

1. Using the area of the trapezium: 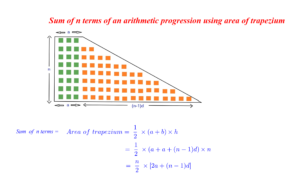 2. Using the area of the rectangle:

Finding the equation of a line using the arithmetic progression:

We know that a=3,common difference is 2. Substituting we get

General equation of a line is y=mx+c.

Here we can observe that m= slope =2 = common difference.

c=1 = Intercept (A point at which the given line cuts the y axis).

In an arithmetic progression intercept means the value of sequence, when x=0.

This can be observed in the graph given below. 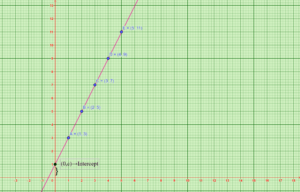