The heart of Makey Makey is its circuit board that connects to a computer via a USB cable. Building circuits that can be used like a joystick or a keyboard key allows users with no coding experience to use Makey Makey to learn, experiment, and invent.

Makey Makey paves the way for “Integrative STEM Education”. “Integrative STEM education” refers very specifically to instructional approaches that intentionally situate the teaching and learning of science, technology, engineering, and /or mathematics concepts and practices in the context of hands-on engineering, designing, and making.

Scratch is a programming language where interactive stories, games, and animations can be created. The Chase game is an example of a program made using the Makey Makey. The game is played with the arrow keys and the notes can be remixed for an array of versions.

This chasing game was coded from scratch and used the Makey Makey kit as a joystick controller. 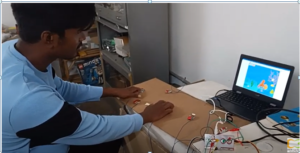 Reflection from Sri Bhavani:
From the Makey Makey hands-on projects with children, they have learned about conducting and non-conducting materials. Current doesn’t flow in an open loop. They learned the open-loop and closed-loop of a circuit. x,y coordinates while moving the sprite.